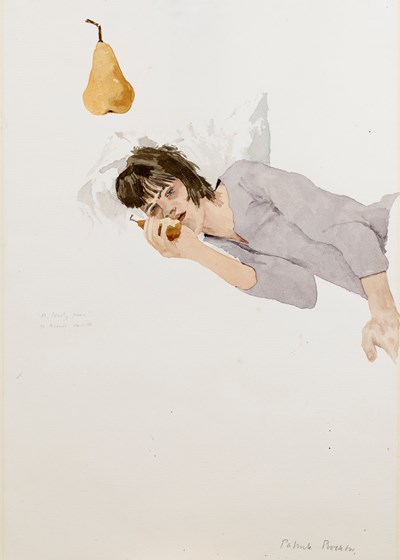 
Gervase Griffiths was a young Oxford graduate who befriended Procktor in 1968 and who became his lover and model for much of the next two years. The two first met in February 1968 at a charity fashion show, when Procktor asked Griffiths, an aspiring musician and part-time fashion model, to pose for him. Griffiths soon moved into Procktor’s flat in London and the two spent much of the year abroad. As the artist wrote, ‘That summer, travelling with Gervase, was the happiest time together...I enjoyed painting him very much and he was a patient sitter. It developed into a collaboration, which it always is to some extent when you paint someone, because they have to give such a lot to you and to trust you.’‘I had started, though I didn’t know it at the time, what was to be almost two years that would be devoted to Gervase: in watercolours, drawings, photographs and large acrylics based on the photographs. I was devoted to him, too; I fell in love with him completely...He had an instantaneous effect on men and women. That year I painted and drew him to the exclusion of everything else.’ Indeed, Procktor’s first exhibition in New York, at the Lee Nordness Gallery in 1968, consisted entirely of large paintings of Gervase Griffiths. The present sheet was drawn on the passenger ship the SS. Bremen, probably on the voyage that took Griffiths and Procktor, accompanied by the English fashion designer Ossie Clarke, to New York for the exhibition. As the artist has written, ‘I have...been on many boats and found the life of ships and the special sense of time you have on a voyage conducive to painting.’ Another watercolour drawing of Griffiths on the SS. Bremen, seated together with Ossie Clark, is in the collection of the Whitworth Art Gallery in Manchester.Procktor recalled of the sitter that ‘It sounds ingenuous, but when Gervase was in a room and somebody came in, man, woman or beast they would always be struck by him. He was magnetic...He was surrounded by people who’d fallen in love with him...I felt that I was very lucky because I shared all this marvellous period of his life, when he was absolutely at his peak, even though he had other affairs.’ The artist produced a large number of watercolour portraits of Griffiths, most of which are today in private collections. Procktor’s relationship with Gervase Griffiths lasted for about two years. Griffiths later settled in South Africa, and died in 1980. As the artist noted in his autobiography, ‘he remains in my mind quite the most beautiful man I ever saw.’

Provenance:
The Redfern Gallery, LondonAcquired from them on April 21st, 1969 by Lord Beaumont (according to a label on the reverse of the old frame)(Timothy Wentworth Beaumont, Lord Beaumont of Whitley?)Anonymous sale, London, Christie’s, 29 July 1988, lot 236Private collection.