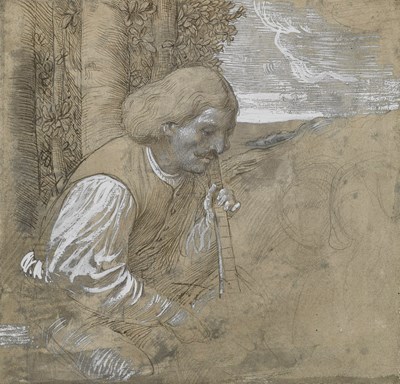 Brown ink, brown wash and black chalk, extensively heightened with white, on buff paper.Signed and dedicated a mon ami Holloway / A. Legros at the lower left corner of the backing sheet.212 x 223 mm. (8 3/8 x 8 3/4 in.)


This drawing is a preparatory study, in reverse, for Legros’ etching Le joueur de viole of c.1868. As one modern scholar has noted, both the drawing and the print ‘strongly evoke Italian prototypes. The viola player set in a landscape suggests Venetian sources. The reserved bystanders in the print are similar to the angels in Piero della Francesca’s famous Baptism of Christ that was acquired by the National Gallery, London in 1861. Contact with latter-day Pre-Raphaelite artists such as Burne-Jones may have motivated Legros to draw upon such sources.’ A related etching by Legros entitled Le joueur de contrebasse may also be dated to the same period.The present sheet bears the artist’s dedication to the printseller Marseille Holloway (d.1910). Holloway dealt in old and modern prints from premises in London, first in Henrietta Street and later in Bedford Street, and published a number of etchings by Legros. The drawing later entered the collection of Frank E. Bliss, who assembled one of the finest and most comprehensive collections of etchings and lithographs by Legros. Together with a large number of drawings and paintings by the artist, these were exhibited at the Grosvenor Gallery in London in 1922. Many of the paintings and drawings, including the present sheet, were sold at Christie’s the following year.