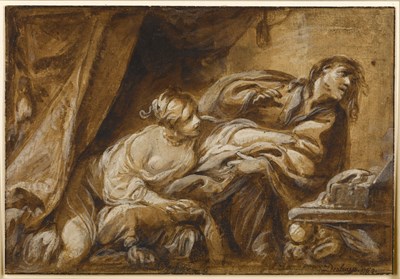 
Around six hundred drawings were dispersed at the posthumous sale of the contents of Deshays’ studio, probably including the present sheet which, with its vigorous handling of the pen and brush, is a fine example of the artist’s bold draughtsmanship. Deshays is known to have exhibited two paintings of the Old Testament subject of Joseph and Potiphar’s Wife, both of which are now lost. The first of these is a youthful work shown at the Ecole des Elèves Protégés in 1751; described as ‘la femme de Putiphar, accusant Joseph’, it may have depicted a different episode in the story from that shown in the present sheet. Dated 1762, this drawing is instead a preparatory study for a later painting of La Chasteté de Joseph, exhibited by Deshays at the Salon of 1763 and in the Seroux d’Agincourt collection by 1769. The painting was widely admired in reviews of the 1763 Salon, with Diderot lavishing particular praise: ‘Si l’on me donne un tableau à choisir au Salon, violà le mien; cherchez le vôtre. Vous en trouverez de plus savants, de plus parfaits peut-être; pour un plus séduisant, je vous en défie.’The present sheet, aptly described as ‘fougueux et fort’ by André Bancel in his recent catalogue of the artist’s work, is the only surviving preparatory drawing by Deshays for the 1763 painting. Individual studies of each of the heads of the two protagonists were recorded in the 1765 Deshays studio sale, but these are now lost. These two drawings may have served as models for a pair of prints of the heads of Joseph and the wife of Potiphar by Louis-Marin Bonnet, one of which is dated 1769, although the prints show some differences in pose and expression with the figures in the present sheet.It has recently been noted that, ‘Deshays had a predilection for the sketch made with the brush as a preparation technique. The dynamic quality of the sketch accords well with his often dramatic subject matter, and he produced a great number relative to his overall output. They are...loose and energetic in their brushwork, yet with a fine sense of proportion and volume often absent in vigorous sketches.’ It is arguably in his oil sketches and in drawings such as the present sheet, rather in his relatively few surviving finished paintings, that Deshays’ abilities can best be seen to their best advantage.