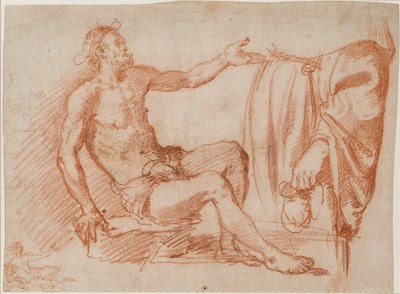 
The present sheet contains studies for the beggar in the left foreground and the saint at the centre of a larger composition by Confortini of A Saint Distributing Alms Among the Poor, recorded in a black chalk drawing in the Szépmüvészeti Múzeum in Budapest. No finished painting by Confortini of this subject survives, although, as Christel Thiem has noted, the artist must have been inspired by Domenico Passignano’s painting of Saint Lawrence Distributing the Riches of the Church to the Poor, painted between 1620 and 1621 for the Calderini chapel of Santa Croce in Florence, since a black chalk drawing by the young Confortini after Passignano’s altarpiece is known. This would indicate a terminus post quem of 1621 for the Budapest drawing, as well as the drawings related to it. Three further studies by Confortini for the figure of the beggar are known. Two of these are in black chalk; a drawing at Christ Church in Oxford and another on the London art market in 1934 and now in the British Museum. The British Museum drawing shows the beggar with his right arm raised, while the Christ Church study, like the present sheet, depicts the figure with a raised left arm. (The position of the legs of the beggar in the present sheet, however, differ from that shown in the other two studies.) A third, more sketchy study of the same figure, drawn in red chalk, is in the Biblioteca Marucelliana in Florence. All of these drawings by Confortini may be dated to around 1631, as they are stylistically comparable with his drawings for the lunettes painted that year for the refectory of Santa Trinità.