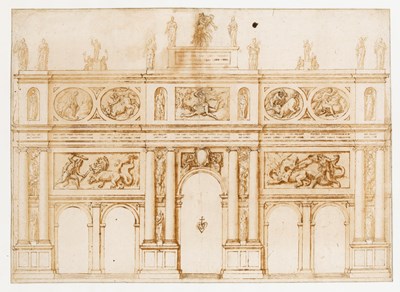 A Design for a Facade of a Triumphal Arch or Temporary Structure, Decorated with Reliefs of the Labours of Hercules, Statues and Trophies Sold

Pen and brown ink and brown wash, over traces of an underdrawing in black chalk. Signed with the artist’s monogram PPAM in a heart with a cross above, at the lower centre of the sheet. Numbered (by Vallardi) V.135 in red chalk on the verso.325 x 491 mm. (12 3/4 x 19 3/8 in.)ACQUIRED BY THE MUSÉE DU LOUVRE, PARIS.


The identification of the present sheet as the work of the 16th century Mantuan architect and painter Pompeo Pedemonte is due to T. Barton Thurber, who in 1994 was the first to identify and publish a group of architectural drawings by the artist. Around thirty drawings for architectural projects by Pedemonte survive today. This large drawing, which bears the architect’s monogram PPAM (for ‘Pompeo Pedemonte Architectus Mantovanus’?), may be closely compared stylistically with a group of sixteen drawings by Pedemonte - ten of which are signed with the same distinctive monogram - in an album today in the collection of the Civico Gabinetto dei Disegni in Milan. Thurber has also tentatively suggested that the present sheet may be a collaboration between Pedemonte and his fellow architect and painter in Mantua, Giovanni Battista Bertani (c.1516-1576), with the latter responsible for the figural scenes.The present sheet can also be related to another drawing by Pedemonte, possibly for the same project, which was sold at auction in 1997 and is today in the collection of the Palazzo Te in Mantua. That drawing, which shares the same provenance as the present sheet, was identified as a design for a triumphal arch erected near San Silvestro in Mantua, on the occasion of the entry of King Henry III of France and Poland into the city on 2 August 1574. The entire decoration called for a total of eight temporary arches, had to be erected within a fortnight, as it was not until late July that the citizens of Mantua learned of the planned visit. While the author of the 1574 decorations is unknown, it would be logical to assume that Pedemonte, as one of the leading architects in Mantua, would have been entrusted with this important commission. While the present sheet may have been part of the same decorative scheme, the presence of scenes from the labours of Hercules would also suggest the possibility that the drawing might have been related to an architectural commission linked to Cardinal Ercole Gonzaga.Another large drawing by Pedemonte - a design for the facade of a palace for Orazio Gonzaga, Marchese di Solferino, and bearing the same monogram as the present sheet - appeared at auction in 1990 and 1991. A design for an elaborate triumphal arch, also signed with the same distinctive monogram and sharing the same provenance as the present sheet, is in the collection of the Kunsthalle in Hamburg. Other comparable drawings by Pedemonte include another design for a triumphal arch in the Courtauld Institute Galleries in London and a large drawing, in a French private collection, of an elevation and partial plan for part of the complex of the Palazzo Ducale in Mantua. Further architectural drawings by Pompeo Pedemonte are in the collections of the Kunstbibliothek in Berlin and the Uffizi in Florence.

A Design for a Facade of a Triumphal Arch or Temporary Structure, Decorated with Reliefs of the Labours of Hercules, Statues and Trophies