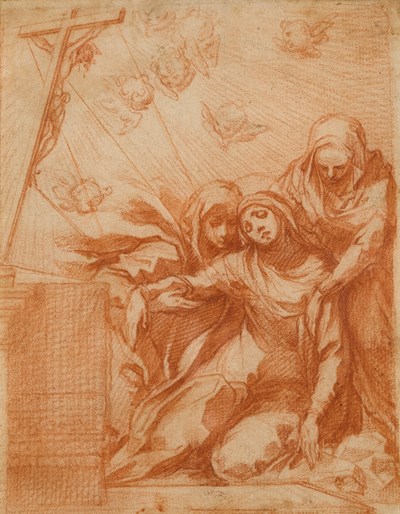 The Ecstasy of Saint Catherine of Siena Sold


Francesco Vanni treated the subject of Saint Catherine of Siena in a number of paintings and drawings, notably in a series of frescoes painted for the Oratorio di Santa Caterina in Siena in 1600. Perhaps his most significant and original interpretation of the iconography of Saint Catherine, however, are his designs for a series of prints of the life of the saint, engraved by the Flemish printmaker Pieter de Jode and published in Siena in 1597. The series comprised twelve engravings - a frontispiece and eleven plates - depicting a total of thirty-three scenes from the life of the saint. Vanni was responsible for the design of each of the plates, which combine three different episodes from the saint’s life in one composition, as well as the accompanying text. Published with a dedication to Christina of Lorraine, Grand Duchess of Tuscany, by the Sienese printer Matteo Florimi, Vanni and de Jode’s engraved Life of Saint Catherine proved very popular. The series was reprinted in thirty-four plates engraved by Cornelis Galle I and published by Phillips Galle in Antwerp in 1603, with each episode being broken up into independent compositions and with therefore different dimensions and backgrounds.This drawing is a preparatory study for part of one of these large engravings, depicting Saint Catherine of Siena Receiving the Stigmata and Healing a Possessed Woman. A study for the print is in the Snite Museum of Art at the University of Notre Dame, and the present sheet may be added to the small corpus of preparatory studies in red chalk by Vanni for the print series, which have been described as ‘fine examples of the attractive and original spontaneity with which this delicate and lyrical artist graced his work.’ These drawings, all in reverse to the printed compositions, can be quite precisely dated to between 1595 (when Pieter de Jode first arrived in Italy) and 1596 or early 1597, bearing in mind that the series was published in October 1597. Of the handful of surviving drawings by Vanni for the engravings, the most significant are eight finished studies in red chalk for the complete compositions, each stylistically comparable with the drawing here exhibited. Six of these full-size compositional drawings, one of which is unfinished, are in the Albertina in Vienna and two more are in the collection of the Dukes of Devonshire at Chatsworth. That the Sienese artist was well served by de Jode in the translation of his designs into engravings has been noted by one scholar: ‘Vanni could hardly have found a better interpreter for his drawings…[Pieter de Jode] captured the formal element in the drawings; the interplay of light and shade which, because always so rigorously coordinated, tend to transform particular elements by highlighting them, thereby achieving those eloquent light effects which are such an attractive feature of the prints….the subtle variations of shading in the dark areas affords some glimpse of the chiaroscuro and tonal contrasts which Vanni contrived to convey pictorially by means of those vivid lighting effects that endow the whole with a sense of poetry.’Apart from being, arguably, Vanni’s most inspired and inventive interpretations of the legend of the local Sienese saint to whom he was devoted, the engraved series of The Life of Saint Catherine of Siena, published at the height of the artist’s career, served to enhance his reputation well beyond the city. As Michael Jaffé has noted, ‘Being a handsome example of collaboration between the Sienese draughtsman in his best years and the Antwerp-trained engraver, it became…a disseminator of knowledge of Vanni’s style, albeit through the stiffer and drier schemata of the prints.’

The Ecstasy of Saint Catherine of Siena