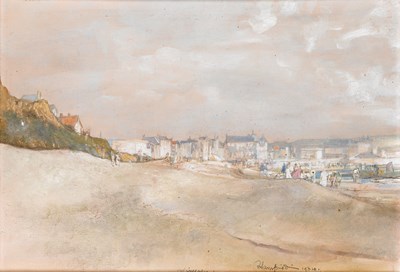 The Dunes at Wimereux, Normandy Sold


This appealing picture may be included among a series of a landscapes painted on small wooden panels by Blampied, several of which - including views of Wimereux, Knokke in Belgium, Zefeld in Austria, St. Brelade in Jersey and elsewhere – were included in the Cleveland exhibition in 1941. Blampied visited the small port of Wimereux (or Vimereaux), near Boulogne in the Pas-de-Calais, several times in the 1930’s, often staying with his friend, the writer and journalist Cecil Hunt.The present work belonged to Sir Bruce Ingram (1877-1963), one-time editor of the Illustrated London News (to which Blampied contributed) and one of the most enthusiastic collectors of the artist’s work. In 1967 a selection of fifty-one drawings and watercolours by Blampied from Ingram’s collection was exhibited at the St. Helier Galleries in Jersey.

The Dunes at Wimereux, Normandy