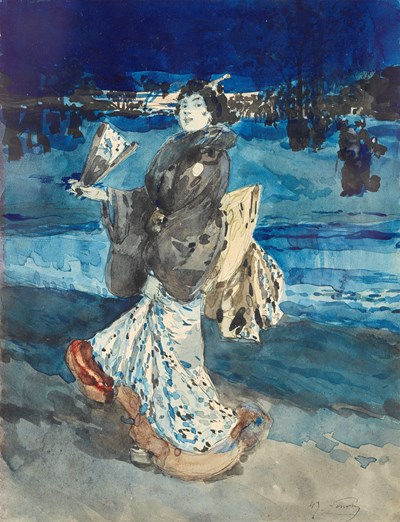 
Like several of his contemporaries, Henry Somm developed a fascination with Japan. He studied the Japanese language and in the early 1870’s had planned a trip to Japan that was abandoned with the outbreak of the Franco-Prussian war. He was friendly with the pioneering ‘Japoniste’ art critic and collector Philippe Burty, and often used oriental motifs in his work. Indeed, Somm became one of the earliest artistic exponents of Japonisme, his work in this genre first developed in his illustrations accompanying a series of articles by Burty under the general title of ‘Japonisme’, published in the magazine L’Art in 1875 and 1876. As one recent scholar has noted of Somm, ‘His fascination with Japanese art is manifested in countless drawings, watercolors, and etchings that depict Japanese geishas, street scenes, and gardens, as well as Oriental objets d’art…Several watercolors painted in the 1880s depict women in Japanese dress and some appear to be geishas – women trained to sing and dance for the pleasure of men. Somm’s fascination and glorification of the Japanese woman appears to be a reaction against the “modern female”, who emerged during the belle époque.’ The present sheet may be included among a group of vibrant watercolours by Somm of women in Japanese dress, several of which depict the subject in a nearly identical pose to that of the woman in this drawing.