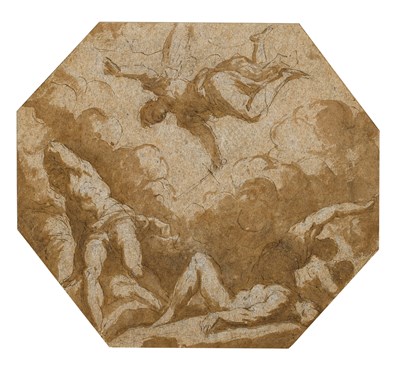 The Fall of the Rebel Angels Sold

Pen and brown ink and brown wash, with touches of white heightening, over traces of an underdrawing in black chalk. Made up at the corners and laid down. Inscribed Palma at the lower right corner, and inscribed Mr de Menthon on the old backing board.235 x 261 mm. (9 1/4 x 10 1/4 in.)


Although no related painting is known, the octagonal shape of this drawing would suggest that it may have been a preparatory study for a ceiling design. A similarly shaped drawing by Palma, formerly in the Michel Gaud collection in Saint Tropez, is a study for a ceiling painting of The Fall of Manna, painted between 1589 and 1590 for the church of the Gesuiti in Venice.Palma Giovane treated the subject of The Fall of the Rebel Angels in at least two paintings, though both are different in composition and format from the present sheet. A painting in the Galleria Borghese in Rome is horizontal in format, while another painting of The Fall of the Rebel Angels in a private collection in Bergamo, though still dissimilar in composition, is closer in shape to the present sheet. A similar subject also occurs in a painting by Palma of the exterminating angels of the Apocalypse, part of a group of canvases making up an Apocalypse cycle painted for the Scuola Grande di San Giovanni Evangelista in Venice in 1581.The present sheet bears the collector’s mark of the 18th century English collector Robert Udny (1722-1802), a West India merchant and collector of both paintings and drawings. In the first half of the 20th century the drawing entered the collection of the art dealer Marie Marignane who, with her brother Maurice, established the gallery M. Marignane & Sœur on the rue de Rennes in Paris, dealing in paintings, drawings and prints. Like her brother, Marie Marignane assembled a small private collection of Old Master drawings. Married to the painter Jacques Patissou, she retired to Nice in 1951.

The Fall of the Rebel Angels