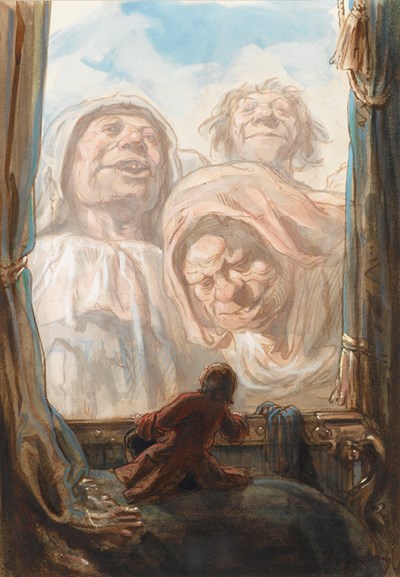 A Man Looking Through a Window at Three Giants Sold

Pen and brown ink and watercolour, heightened with gouache, over traces of an underdrawing in pencil. Signed Gavarni at the lower right.234 x 164 mm. (9 1/4 x 6 1/2 in.)ACQUIRED BY THE NATIONAL GALLERY OF ART, WASHINGTON, D.C.


This drawing illustrates a scene from Jonathan Swift’s novel Gulliver’s Travels. Gavarni produced sixteen illustrations for a French edition of the book, published in Paris as Les Voyages de Gulliver in 1862, as he had for Daniel Defoe’s Robinson Crusoe the previous year. Although the book illustrations were not highly regarded by the Goncourts, who described them as insipid, the quality of the original preparatory watercolours themselves was beyond reproach. As Paul-Andre Lemoisne noted, ‘the engravings…have lost a great part of the delicacy and charm of Gavarni’s watercolours.’ In their account of the artist’s life and work, published after his death, the Goncourts recalled: ‘We can still remember the almost thankful voice with which he told us, the day when he brought to us the two first watercolours of illustrations of Gulliver, and he saw us so delighted at their clarity, limpidity and “blondness”: - “You think so?...Well! It really heartens me, my friends, what you tell me…”. There was, in those words, almost a touch of surprise to be still so admired.’The scene depicted in this drawing is set in the land of Brobdingnag, populated by colossal giants, which Gulliver discovers following his stay on Lilliput. Captured by a farmer and exhibited for money as a curiosity, he comes to the attention of the Brobdingnagian Queen and is taken to the capital city of Lorbulgrud. Gulliver becomes the favourite of the Queen and travels everywhere in a small wooden box made for him, ‘with Sash-windows, a Door, and two Closets, like a London bedchamber’, containing a bed, two chairs and tables and a cabinet. As Gulliver later recalls, ‘One Day the Governess ordered our Coachman to stop at several shops, where the Beggars watching their Opportunity, crowded to the sides of the Coach, and gave me the most horrible Spectacles that ever an English Eye beheld.’A stylistically and thematically related watercolour drawing by Gavarni of Gulliver and the Scholars of Lorbulgrud is in the collection of the Walters Art Museum in Baltimore.

A Man Looking Through a Window at Three Giants