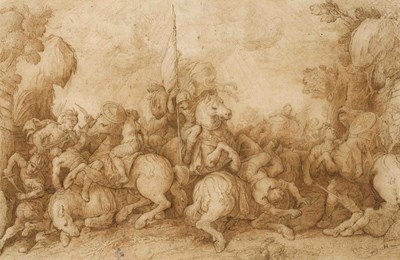 
This large drawing may be dated to the second half of Fenzoni’s career, when he was working in Faenza, and is part of a group of four drawings of unidentified battle scenes, in each of which appears the same central protagonist of a young armoured horseman. Two of these drawings are in private collections and the third, which is slightly different in format and technique, was last recorded on the London art market in 1980. Crowded compositions filled with figures and horses, all four drawings depict a cavalry battle taking place around a fluttering standard, underneath low clouds through which burst rays of sunshine.Nicolas Schwed has recently made the intriguing suggestion that these four drawings - which are datable to the later 1620’s, when Fenzoni was working almost exclusively in pen and ink - might be related to the decoration of the artist’s own home in Faenza. One of this group of drawings of battle scenes, today in a private collection in Paris, incorporates Fenzoni’s coat of arms on the shield of one of the fallen warriors, to which the young horseman points with his sword. The same coat of arms is found on a drawing in the Uffizi which is a design for the decoration of the loggia of a palace, with two putti flanking the Fenzoni coat of arms above a landscape painting set into a painted or stucco frame. While a landscape drawing of this type is also in the Uffizi, a case may be made for the four battle scenes to have been intended as studies for paintings to be inserted into the same sort of mural decoration.The present sheet may be compared stylistically with such drawings by Fenzoni as a Beheading of Saint John the Baptist in the Uffizi, preparatory for a painting of c.1614, and a study of Saint Martin Dividing his Cloak with a Beggar, also in the Uffizi. As Schwed has noted, these late studies ‘are drawn using a technique consisting of small strokes of pen and ink, more or less dense, depending on the effects of light Fenzoni wanted to create…Fenzoni drew with this painstaking technique up to the end of his career.’