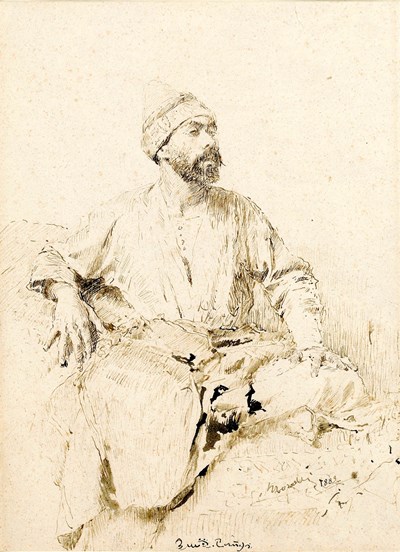 
Orientalist or Islamic subjects account for a small but distinctive part of Morelli’s painted oeuvre. He never seems to have visited the Near East, although he owned a large collection of photographs of sites in the Holy Land and elsewhere. The model depicted by Morelli in the present sheet also appears in a painting of an Arab musician playing a musical instrument on his lap, datable to the mid-1870’s. Formerly in the Stevens-Ricciardi collection in Naples, the painting is today in a private collection.A number of similar pen drawings by Domenico Morelli of Arab sitters are known. Comparable examples include a study of a Seated Arab in the Frugone collection at the Villa Grimaldi Fassio in Genoa and a drawing of a Laughing Seated Arab in the Galleria Civica d’Arte Moderna e Contemporanea in Turin, which also houses a stylistically similar study of Christ, which is a preparatory study for Morelli’s painting of Christ in the Desert of c.1893 in Galleria Nazionale d’Arte Moderna in Rome.