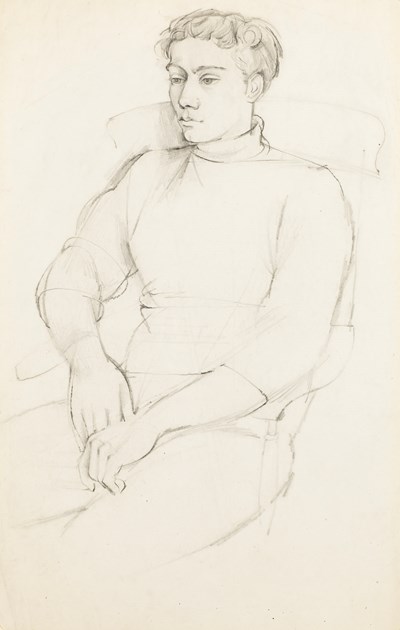 
The present sheet is a portrait of Eric Verrico, a pupil at the Camberwell School of Arts and Crafts, and one of a group of young students who gathered around the inspiring figure of Minton and became known as ‘Johnny’s Circus’. Possessed of ‘astonishing good looks’ and ‘looking as if had stepped out of a Caravaggio’, Verrico frequently posed for Minton, appearing in such paintings as Cornish Boy at a Window of 1948, today in the Government Art Collection. Conscripted into the R.A.F. Verrico changed his surname to Verrier and lost touch with Minton.A painted portrait of Verrico of 1948, for which this drawing may have served as a preliminary study, is in the collection of the Royal Albert Memorial Museum in Exeter. Another portrait of the same sitter, painted a year earlier, was formerly in the collection of Muriel Belcher, while Verrico had earlier appeared with two fellow Camberwell students in a triple portrait painted by Minton in 1946, now in the Tel Aviv Museum of Art.In his painted and drawn portraits of friends and students, Minton often preferred to depict his subjects seated and seen from a high vantage point, and with the sitter’s hands clasped in his lap. These pencil portraits, ‘superb examples at their best of unforced draughtsmanship’, in the words of one critic and friend8, are among Minton’s finest drawings.