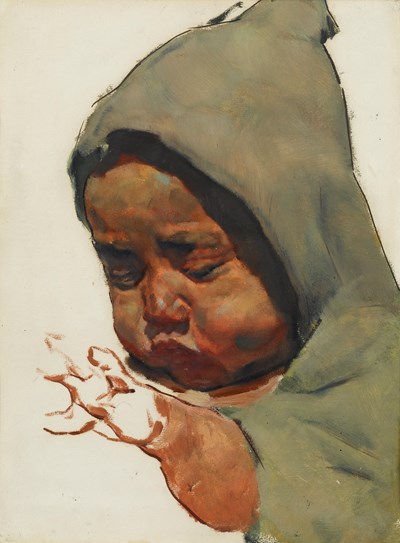 Study of a Moroccan Baby Sold

Oil on paper. A sketch of the head of a baby in pencil on the verso. Inscribed Geshenck an / Fol. Irna Schönfeld zu / ihrem Gebürtstag am / 15.12.1943 / 15 Lauderdale Mansions / London W8 / Studie eines marokkanischen Babies / von Professor Erich Wolfsfeld, / Lehrer an der Berliner Kunst- / Akademie bis 1936 on the verso.Further inscribed Sketch of a Morocco Child on the back of his mother / Given to me by E. Wolfsfeld on my / birthday 1943, Lauderdale Mansion, W.8 London. in blue ink on the backing board, and Professor Erich Wolfsfeld, / of the Academy of Fine Arts, / Berlin. / Germany / up to 1936. ion the backing board. Also inscribed At the back of this / sketch is a rough drawing / of baby Jill Pomerance / (Parents Ben and Fay Pomerance / of Sheffield) on a label pasted onto the backing board. 392 x 281 mm. (15 3/8 x 11 1/8 in.)


This vigorous oil sketch of a baby, depicted resting on its mother’s back, can be related to a similar figure in a large painting of North African women and children which was on the art market in London in 1990. The same child also appears in an oil sketch of Arab figures that appeared on the art market in England in 2009. The pencil sketch of the head of a baby on the verso of the sheet is, according to a label pasted onto the backing board, a portrait of Jill Pomerance, the daughter of the painter Fay Pomerance. Mrs. Pomerance befriended Wolfsfeld soon after his arrival in England, and the artist lived at her house in Sheffield both before and after his period of internment on the Isle of Man. Pomerance also organized the first exhibition in England of Wolfsfeld’s work, held at the Graves Art Gallery in Sheffield in 1939. In a brief written account of her friendship with Wolfsfeld, Fay Pomerance recalled that ‘I think his favourite commissions were those of children, for he delighted in them and in painting them. He first painted our daughter Jill when she was a very small infant – three head studies with a fourth thrown off while he was cleaning his brushes, prompting an enquiry of me following the Graves exhibition as to how my triplets were doing!’

Provenance:
Given by the artist in December 1943 to Erna Schönfeld, LondonThence by descent to a private collection, Walton-on-Thames, until 2008.

Study of a Moroccan Baby