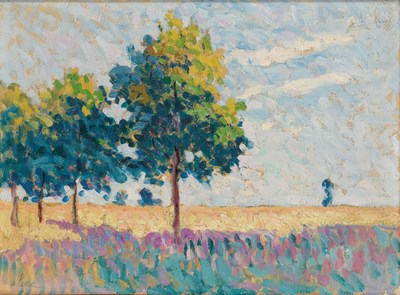 
This vibrant oil sketch may depict a view near the town of Méréville, about fifty kilometres south of Paris, where Luce spent several summers in the first few years of the 20th century. Located in the valley of the river Juine, the town is best known for the Chateau de Méréville, with its Romantic park and gardens constructed in the late 18th century. A comparable landscape painted by Luce at Méréville in 1903 is in the collection of the Staatliche Kunstsammlungen in Weimar, while a similar work, datable to c.1905 and also depicting the area around Méréville, is in a private collection in New York. A Paysage dans les environs de Méréville sold at auction in 1990 may also be compared stylistically to the present work, as can another Méréville landscape in a private collection. Denise Bazetoux has confirmed the attribution of the present sheet. She has succinctly described Luce’s landscape paintings of the first decade of the new century as ‘free of the theoretical rigidity of neo-impressionism, but still imbued with the desire to construct the subject carefully, and capture the light.’