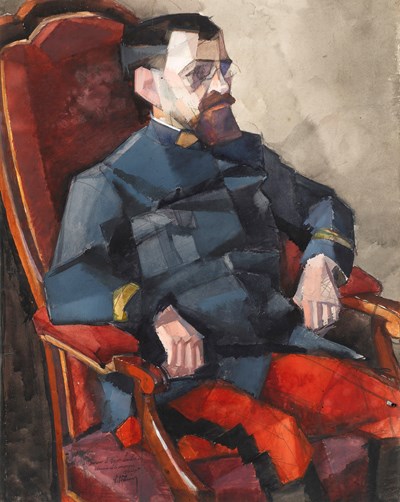 
Drawn between 1914 and 1915, the present sheet is a relatively early work by the artist, and one of the very few surviving works from the period of the First World War. Valmier was associated with several Cubist artists in Paris in the years leading up to the war, and was particularly influenced by the work of Albert Gleizes. Valmier met Gleizes when both artists were conscripted to serve with an infantry regiment at Toul in Lorraine in 1914. There they were under the command of Major Mayer Lambert (1870-1943), a doctor from Nancy, who allowed both artists the freedom to continue working while serving in the army. As Gleizes noted in a later, unpublished manuscript, ‘I first met Georges Valmier at the beginning of the First World War at Toul, in the 367th infantry regiment, where I myself was mobilized. With other reservists, writers, artists we formed a small group of friends who preserved faith in and enthusiasm for the vales of the intellect, to which we had devoted our lives. Thanks to the efficacious understanding of the head doctor of the depot, Doctor Lambert, professor of physiology at the faculty of Nancy, we were able to continue working.’Both Valmier and Gleizes used Dr. Lambert as a model for several paintings and drawings during the war years, most notably in Gleizes’ only major canvas of this period, the Portrait of an Army Doctor of 1914, now in the Solomon R. Guggenheim Museum in New York. Major Lambert seems to have much preferred Valmier’s portrait of him to that of Gleizes, as the latter later noted in his unpublished Souvenirs: ‘The portrait that he [Valmier] made of the Doctor was excellent, a very good likeness that remained in the classical idiom. But for myself, I wanted to remain faithful to Cubism and not to play games with my own convictions. So the portrait I envisaged was a little surprising for the good doctor’s habits of mind. He did not conceal his way of thinking, but let me do what I wanted. I made of him, from memory, a large number of drawings…when he saw them, the model was pretty shaken…When [the painting] was finished…he refused, definitely but amicably, to take possession of it.’Among the very few extant works of the same period by Valmier is a stylistically comparable (albeit rapidly drawn) portrait sketch in pencil of another military figure, a Général Dourakine, which is signed and dated 1914.