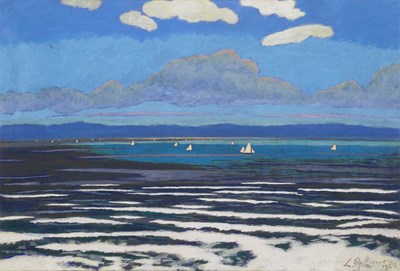 
This large sheet may be included among a group of powerful seascapes in watercolour and gouache produced by Spilliaert in the 1920’s and early 1930’s. Comparable drawings, executed in pure gouache or a combination of gouache, pastel and watercolour, are in the Royal Museums of Fine Arts of Belgium and in several private collections. These works, in which the sea sometimes takes on an almost abstract quality, show the artist’s interest in light effects and nuances of colour, with a human presence signified only by distant boats. As early as 1912, the French critic François Jollivet-Castelot, one of the artist’s first critical advocates, noted of the young painter that ‘His art communicates, above all, the vertigo of the infinite. When he paints a seascape, it is as if, there in front of you, is the endless ocean with its mysterious waves, the monotonous beach and a sky which becomes one with the sea in the distance…Here there is no affectation, no prettiness or graciousness; Spilliaert’s style remains untiringly grand, beautiful, simple – as large as nature herself.’ Such critical assessment of Spilliaert’s marine subjects has continued to the present day, with one modern Belgian writer noting that ‘Spilliaert’s reputation also continues to shine because of a few seascapes. His better seascapes…are among the strongest images ever made of our coastline and sea. If the sea could choose its own portraits, it would want these.’