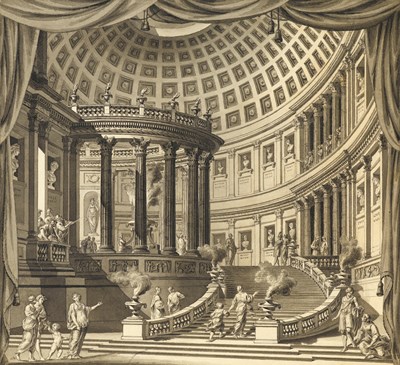 Design for a Stage Curtain: The Interior of an Elaborate Temple Dedicated to Illustrious Men Sold


The appearance of the temple in this drawing is derived from an etching by Giovanni Battista Piranesi (1720-1778) of a temple dedicated to Vesta, included as part of his Prima Parte di Architetture, e Prospettive inventate, published in Rome in 1743. Although Piranesi’s etching is vertical in orientation and differs in both staffage and several significant architectural details from the present sheet, the close relationship between the two is readily evident. Petitot is likely to have made the present drawing while a pupil at the Académie Royale d’Architecture in Paris, or as a pensionnaire at the Académie de France in Rome.Among stylistically comparable works by Petitot dating from his Roman period is his elaborate design for a temporary structure or macchina for the Roman firework festival of the Chinea in 1749, engraved several years later by Pierre Patte, as well as a Project for a Triumphal Bridge in Rome of c.1747, recorded in an engraving by the artist himself.The pencil inscription on the verso states that the present sheet is a design for a stage curtain for a theatre in the Lombard town of Pavia.

Design for a Stage Curtain: The Interior of an Elaborate Temple Dedicated to Illustrious Men