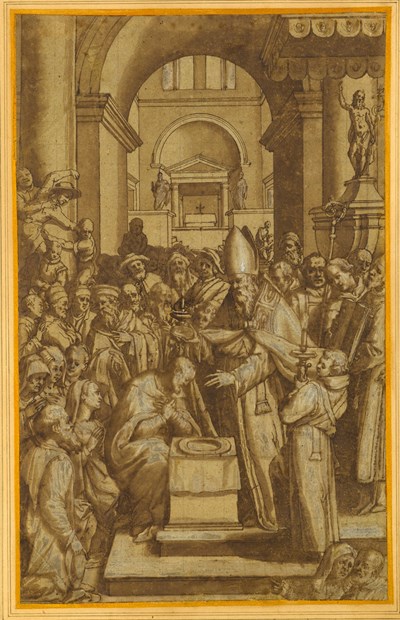 The Baptism of Saint Augustine Sold

Pen and brown ink and brown wash, heightened with white, over traces of an underdrawing in black chalk, on blue-green paper. The sheet lightly squared for transfer in black chalk. Laid down on an 18th or early 19th century mount. 407 x 258 mm. (16 x 10 1/8 in.)


The present sheet has long been regarded as the work of the Pesarese artist Niccolò Martinelli, known as Il Trometta (c.1540-1611), and was first published as such by John Gere in his seminal 1963 article on that artist’s drawings. Recently, however, this large drawing has been recognized by Denis Morganti as a rare and significant drawing by the Umbrian artist Felice Damiani, who was active between 1562 and 1608. The drawing is a preparatory study for Damiani’s altarpiece of The Baptism of Saint Augustine of 1594 in the church of Sant’Agostino in Gubbio, a painting regarded by several early writers as the artist’s masterpiece. The 18th century scholar, Luigi Lanzi, wrote of the artist that ‘His most studied and powerful work is at S. Agostino di Gubbio, the Baptism of the Saint, painted in 1594, a picture abounding in figures, and which surprises by the novelty of the attire, by its correct architecture, and by the air of devotion exhibited in the countenances. He received for this picture two hundred scudi, by no means a low price in those times.’Only six other drawings may be attributed to Felice Damiani. The present sheet is particularly close in style and technique to a drawing of the Visitation in the British Museum, which was recognized by Hugo Chapman as a study for one of Damiani’s paintings in the Santuario della Madonna dei Lumi in San Severino Marche, executed in 1594.

Provenance:
Alister Mathews, Bournemouth (as Domenichino)Purchased from him in 1955 by Ralph Holland, NewcastleThence by descent until 2013.

The Baptism of Saint Augustine