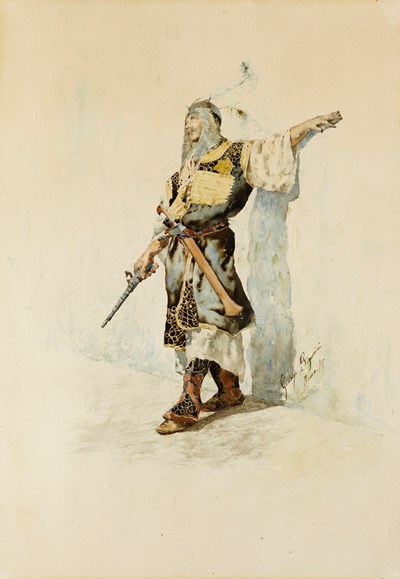 Watercolour over traces of a pencil underdrawing. Signed, dated and inscribed Giuseppe Signorini / Roma 78 at the lower right.533 x 373 mm. (21 x 14 5/8 in.) [sheet]ACQUIRED BY THE NATIONAL GALLERY OF ART, WASHINGTON, D.C.


Drawn in Rome in 1878, this large sheet is a fine and typical example of Signorini’s Orientalist watercolours of single figures dressed in elaborate costumes, drawn with great verve and confidence. Drawings such as this were not studies for larger compositions, but were sold as independent works of art in their own right. Among stylistically comparable drawings is an unfinished watercolour of A Man in a Turban in the collection of the Princeton University Art Museum and a Nubian Soldier on the art market in Paris in 1987.

A Moorish Soldier Holding a Pistol