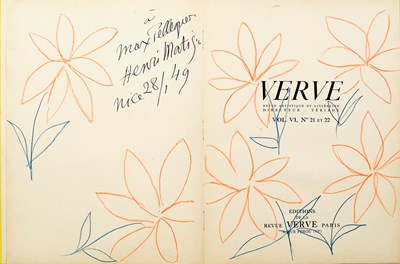 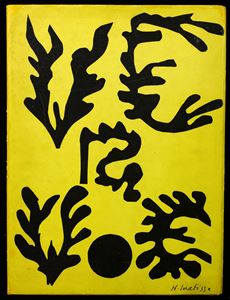 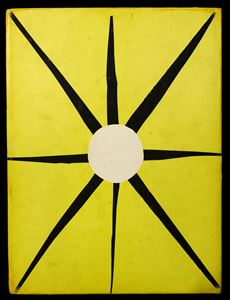 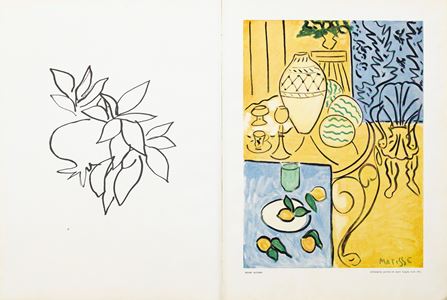 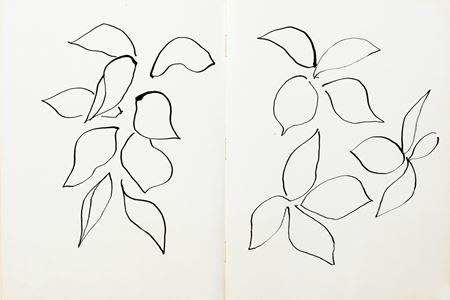 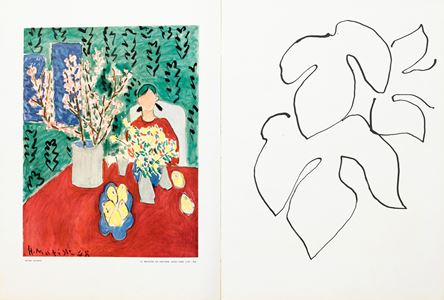 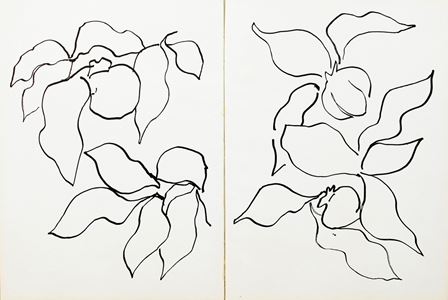 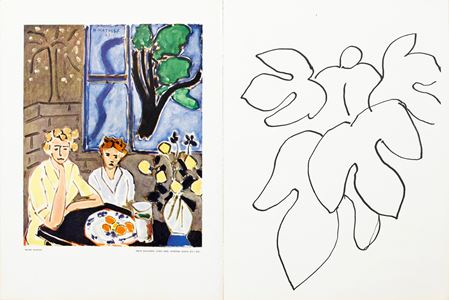 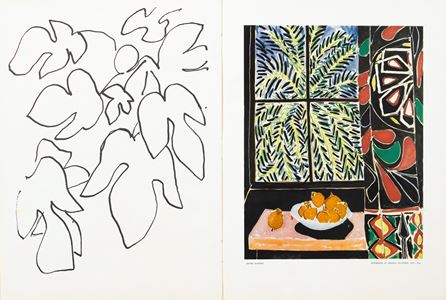 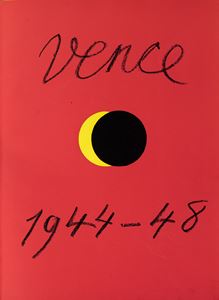 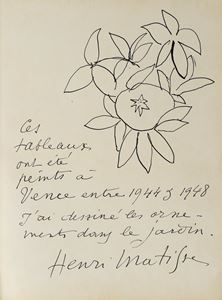 
The present sheet is drawn on the first blank verso and title page of an issue of Verve magazine, a quarterly artistic and literary review published between 1937 and 1960 in both English and French editions, and edited by the Greek-born writer, critic and publisher Stratis Eleftheriades, known as Tériade (1897-1983). The drawing is sold with a copy of the magazine, which also includes an original colour lithograph frontispiece and cover designed by Matisse. This particular issue of Verve (No.21/22) appeared in October 1948, and was devoted entirely to a series of reproductions of paintings and drawings by Matisse, executed in his studio in Vence between 1944 and 19481. The ink drawings by Matisse reproduced within the magazine, as well as the colour lithographs on the front and back covers and the frontispiece3, were specially commissioned for this issue of Verve, which contains a total of twenty-five plates in colour and forty plates in black and white.Matisse and Tériade had collaborated on a previous issue of Verve, published three years earlier, in November 1945, with the title De la Couleur. The success of that project led Tériade to devote another entire issue of the magazine to Matisse’s recent work. As Michel Anthonioz has written, ‘The project got under way while Tériade was spending Christmas of 1947 at Saint-Jean-Cap-Ferrat. The paintings strewn about Matisse’s studio and house were important enough (and there were enough of them) to fill an issue of Verve. Apparently, Matisse was quite willing to round out reproductions of his work with line drawings he would do in his garden and in the garden of Tériade’s Villa Natacha. Pomegranates, acanthus leaves, oranges and orange-tree leaves, ivy leaves cast on white pages, provide this issue with a rhythmic “breathing” and act as interstitial tissue between the paintings. These line drawings, done quickly without corrections, were repetitions of a single motif. Matisse drew them while sitting in his wheelchair; often the work was physically taxing. Today they strike us as spiritual, an ascesis of the eyes.’Anthonioz further notes that ‘Matisse’s cover for Verve Nos.21/22, an original lithograph, fairly bursts with delight in the sun and Mediterranean light. A blinding yellow background sets off some of those half-plant, half-shell cut-outs of which the artist was so fond. (Reminiscences of Tahiti?) This ‘hymn to the sun” spills over onto the back cover, where its rays overwhelm the entire surface, and is extended to include the frontispiece (a lithograph that features a solar eclipse). There is no text in this issue, aside from some prefatory lines handwritten by Matisse…The absence of any literary contribution is striking: this is the only issue of Verve that does include a poem, article, or some other form of original writing.’ Matisse seems to have been quite pleased with how this issue of Verve turned out. As he wrote in a letter to Tériade, dated 14 November 1948: ‘Yesterday I received two copies of the Verve-Matisse. It’s all right! Word has reached me that Bérès displayed it in his window and that it looked very nice. I’m not surprised. Red-white-black – well-proportioned, or well enough…Anyway, let’s wish it every success. Everyone did his best. As we all know, reproductions can only be approximate.’ Four days later, he wrote again to Tériade: ‘Take a look at the November 15 issue of Combat. A Mr. Charles Etienne, whom I do not know, talks about our recent Verve and hails it as ‘an event, for it gives us our first look at the paintings Matisse did in Vence, and in flawless colour reproductions.’ Obviously that’s what all of us were hoping for. So let’s all be happy and satisfied.’These original studies of flowers in red and blue chalk on this double-page spread of the title page of the magazine were drawn by Matisse on January 28th, 1949, when he presented this issue of Verve to Max Pellequer. A Parisian banker and art collector, Pellequer was a close friend of both Matisse and Pablo Picasso, for whom he acted as financial advisor and banker. This drawing is listed in the Archives Matisse under no.CR31. A photo-certificate from Wanda de Guébriant, dated 26 August 2011 (ref. no. I 82-8118) accompanies the work.

Provenance:
Presented by the artist in January 1949 to Max Pellequer, ParisPrivate collection, France.