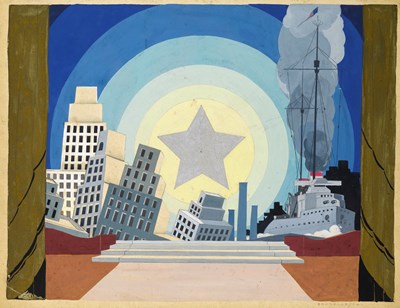 Design for a Stage Set: America


Between the two World Wars, Umberto Brunelleschi worked mainly for the stage, designing costumes and sets for the Folies-Bergère, the Théâtre du Châtelet and the Casino de Paris between 1919 and 1939. He worked in particular the revues of the American star Josephine Baker, for whom he created costume designs, and also provided stage designs for the Teatro alla Scala in Milan and the Roxy Theater in New York, as well as theatres in Germany and Italy. Among his most significant commissions were the original costumes and set designs for the premiere of Puccini’s Turandot at La Scala in Milan in April 1926. Datable to c.1935, the present sheet has been tentatively related to The Girls in Uniform, a Bluebell Girls revue of that year. Other stage designs and costume studies for the same production by Brunelleschi are known.

Design for a Stage Set: America