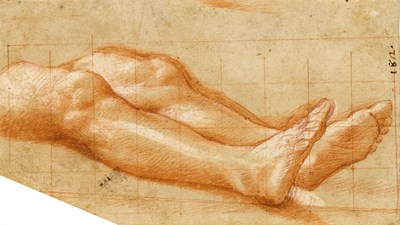 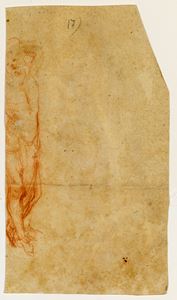 
The recto of this drawing would appear to be a study for one of Gatti’s earliest and best-known works; the large painting of The Virgin Mourning the Dead Christ (or The Lamentation) of c.1528-1530, painted for the church of San Domenico in Cremona and now in the Louvre. As Giulio Bora has noted of the artist, with particular reference to the Louvre painting, ‘Because of his early training in the Po Valley…and his later association with Correggio, Gatti was deeply rooted in the Leonardesque tradition…This aspect of Gatti’s work also informs the dramatic Lamentation, once in San Domenico, Cremona, and now in the Louvre. The artist’s impressive ability to realistically portray anatomy anticipated the realism of later painters by several decades. Longhi, for example, named the Lamentation one of the important influences on Caravaggio. Gatti’s accomplishment is especially extraordinary because, as the same time and in the same city, other artists were painting in the refined language of Mannerism, which enjoyed widespread popularity in the Po Vallery.’Among stylistically comparable drawings by Gatti is a red chalk study of a standing male nude in the Musée des Beaux-Arts in Rennes.The small sketch on the verso of the present sheet would appear to be a study, in reverse, for a more finished drawing of Saint Sebastian in the Uffizi, which remains unrelated to any surviving painting or fresco by Gatti.

Study of Legs [recto]; Study for a Saint Sebastian [verso]