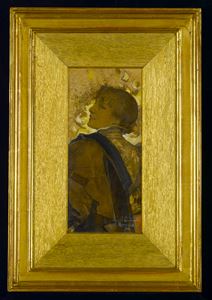 Watercolour, over an underdrawing in pencil and chalk, reworked with white gouache, oil and gold, with ornamental embossing, on a thin card. The outlines and framing lines incised and the whole varnished. Signed, dated and dedicated A Madame / Maurice Bernhardt / Louis ABesnard. / 96. at the lower right.237 x 121 mm. (9 3/8 x 4 3/4 in.)


Sarah Bernhardt (1844-1922) was the most famous actress and celebrity of her age. As one recent author has commented, ‘no actress - not even Garbo - has ever attained such heights of fame. As early as 1883, a reliable witness, Emile Bergerat, ranked her, together with Victor Hugo and Gambetta, as one of France’s three most illustrious citizens.’ 'The Divine Sarah', as she was known, loved to be surrounded by images of herself, and was in turn much admired by artists. She posed for artists as diverse as Alfred Stevens (with whom she studied painting and who was one of her lovers), Georges Clairin, Edward Burne-Jones and Graham Robertson. This drawing is signed, dated and dedicated to Sarah Bernhardt’s daughter-in-law, Mme. Maurice Bernhardt, née Princess Marie-Thérèse Jablonowska. Married to Bernhardt’s only son Maurice, she died in Paris in 1910. Another, similar portrait of Sarah Bernhardt by Louis-Albert Besnard, dated two years earlier, was given by the artist to the sitter, and is now in a private collection. A watercolour by Besnard of a Spanish Dancer, signed and dated 1893 and stylistically similar to the present sheet, was on the London art market in 1988.The German collector Dr. Gustav Rau (1922-2002) assembled a large and eclectic collection while at the same time working as a doctor in Africa. He built a children’s hospital in the town of Ciriri in Eastern Zaire (now the Democratic Republic of the Congo), but would travel to Europe several times a year to attend auctions and visit art dealers. His collection of Old Master and Impressionist paintings – by artists such as Fra Angelico, Pierre Bonnard, Paul Cézanne, Lucas Cranach, Edgar Degas, Gerrit Dou, Jean-Honoré Fragonard, El Greco, Claude Monet, Camille Pissarro, Guido Reni and Auguste Renoir - was kept in a warehouse in Zurich. In 1993 he retired from his medical work and settled in Monaco; on his death in 2002 he left the bulk of his collection to UNICEF in Germany, to be used to finance humanitarian projects in Africa and elsewhere in the Third World.

Provenance:
Presented by the artist in 1896 to Mme. Maurice Bernhardt, ParisDr. Gustav Rau, StuttgartBequeathed to UNICEF Germany in 2001.