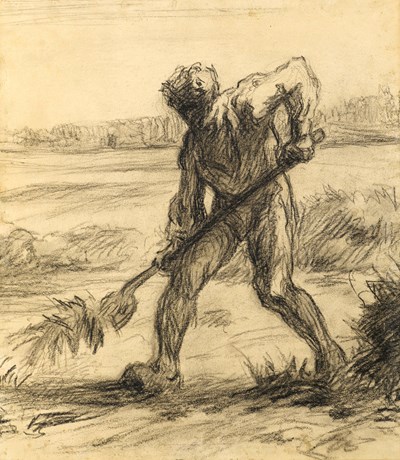 A Peasant at Work in a Field Sold


Many of Millet’s finest drawings are studies of peasant men and women at work. This was a world he knew well, and one that he was born into. As a young boy in the small village of Gruchy in Normandy, Millet had worked alongside his father on his family’s farm - looking after the animals, tilling the soil, sowing and reaping – and remained proud of these experiences throughout his later life as an artist. Millet remained deeply attached to the idea of the French countryside, and to the people who lived and worked there, and strove to accurately and sympathetically represent their daily lives in the paintings he sent to the annual Salons. As Robert Herbert has written, ‘[Millet’s] view of the peasant was a conservative one. He was convinced that man is condemned forever to bear his burdens, hence he made the peasant into a victim of unyielding fate that kept him in the unchanging cycle of work and exhausted repose, the cycle that has been his lot since ancient times.’ But at the same time Millet’s peasant figures are often imbued with a sense of dignity, and at times even of grandeur. Indeed, as Herbert points out, ‘His work joined in a complex process that resulted in the elevation of common man to the rank of history painting.’Previously unknown and unpublished, this powerful sheet is unusually large among Millet’s charcoal drawings, and has the appearance of a finished work for sale, or perhaps to be given away as a present. However, the lack of a signature would suggest that it was part of a repertory of figure poses that the artist chose to keep in his studio. Millet often produced drawings that served to celebrate any and all manner of farm work, even such prosaic activities as the spreading of manure depicted in the present sheet.A related chalk drawing, smaller in scale and horizontal in format, showing the same figure in an extensive landscape with a waggon in the distance, is in the collection of the Mohamed Mahmoud Khalil Museum in Cairo, Egypt. As Alexandra Murphy has noted of the Cairo drawing, ‘Millet understood the twisting, tiring movements involved in spreading manure’, and this is even more evident in this large and impressive sheet, which focuses on the vigorous actions of the man. The Cairo drawing is part of a coherent group of around twenty drawings of farm workers, executed in Barbizon in the early 1850’s and known collectively as the L’Epopée des champs (Epic of the fields), which the artist kept for himself and which served as inspiration for the remainder of his career. The present sheet may be similarly dated to between 1849 and 1852, with the broad plain of Barbizon visible in the background of both drawings.

A Peasant at Work in a Field