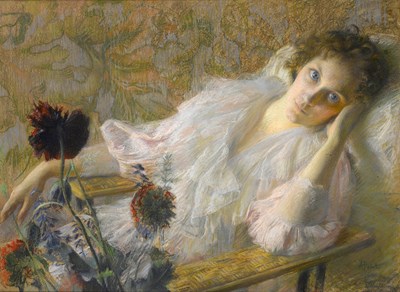 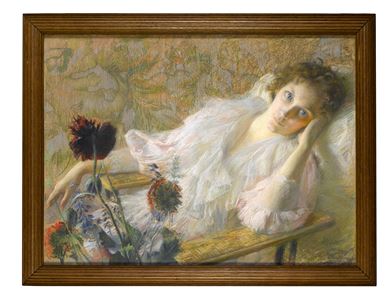 
This beautiful pastel portrait was exhibited by Armand Point, with the title Âme d’Automne, at the Salon of the Société Nationale des Beaux-Arts on the Champ de Mars in Paris in 1893. A contemporary photograph of the exhibition shows the present work hanging alongside nine other highly finished pastel paintings of young women by the artist. All of the works shown by Point at the Salon de la Société Nationale des Beaux-Arts of 1893 were much admired by critics, and two of the pastels were purchased by the State.The model for this pastel portrait was Point’s companion and muse, Hélène Linder (1867-1955), who met the artist around 1886. Linder posed for several of his finest paintings, drawings, pastels and prints of the 1890’s. As the Point scholar Robert Doré has noted of the artist, ‘his observations focused on Hélène...she remained his preferred model until the end of the century...She was above all the inspiration and muse of Armand Point who would, thanks to her, know a period of exceptional creativity.’ Hélène Linder and Point lived together at Marlotte for nearly eight years. This period, as Doré has noted, accounts for some of ‘the artist’s finest works [in] the most brilliantly creative period in his career. These works are a testament to the deep tenderness that unified them, and the enthusiasm they shared in Marlotte.’ Point and Linder remained together until 1899, when Hélène met and eventually married the diplomat Philippe Berthelot.Datable to 1892 or early 1893, this large and beautifully preserved pastel portrait is one of the finest works of Armand Point’s early maturity, and splendidly displays the artist’s talents as a draughtsman. Long held in private collections, it has remained largely unknown to scholars since it was exhibited at the Salon de la Société Nationale des Beaux-Arts in Paris in 1893.