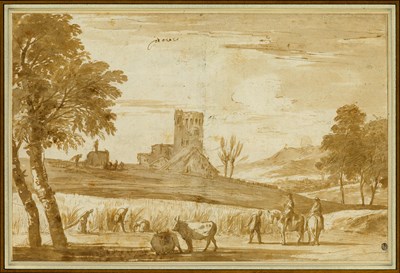 Landscape with Harvesters, a Castle Beyond Sold


This charming, fresh landscape may have been intended as an independent work, like the artist’s better-known gouache landscapes. The chronology of these pen drawings is difficult to establish, as only two dated examples are known. Ricci would often keep these drawings in his studio, to be used as a source of pictorial motifs in his paintings and etchings.This drawing bears the collector’s mark of Dominique-Vivant Denon (1747-1825), the most powerful administrator of the arts in Napoleonic France. A diplomat, writer, archaeologist and engraver, he was also a discerning and wide-ranging art collector. Denon’s collection of drawings numbered around 1,400 sheets, of which slightly more than half were by Italian artists.

Landscape with Harvesters, a Castle Beyond