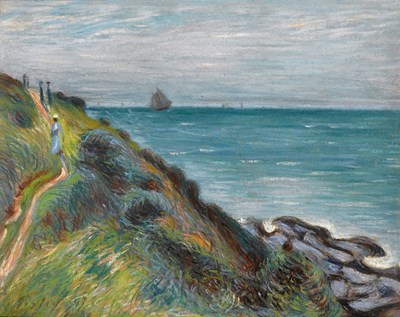 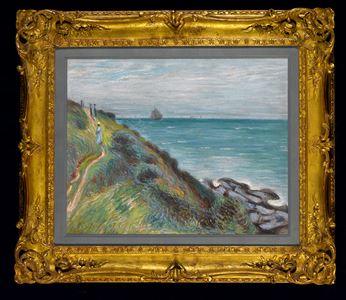 
Although some nine hundred paintings by Sisley are known, his oeuvre includes only a very few drawings, of which the handful of pastel landscapes – most of which are datable to the 1880’s and 1890’s - are the most significant. As Richard Shone has noted, ‘As a medium, pastel was new in Sisley’s work, but he took to it with mastery...Sisley’s pastels are entirely of landscapes.’ These works display the artist’s consummate mastery of the pastel medium, as can be seen in this magnificently fresh and vibrant coastal scene, drawn near the end of Sisley’s life.In the summer of 1897, and possibly with the financial support of the Rouen collector François Depeaux (1853-1920), who had coal-mining interests in Wales, Sisley was able to spend four months travelling and working in Britain; this was to be his final visit to his ancestral country. After spending a brief time in London and the South of England, he visited South Wales, where he remained for the rest of his stay. Based at Penarth, a seaside resort town at the southern end of Cardiff Bay, Sisley produced five paintings of views in the area. On August 5th he married his long-time companion Eugénie Lescouezec in Cardiff, and from Penarth the couple moved west along the Gower coast to Swansea, where they spent their honeymoon at the Osborne Hotel in the holiday resort town of Langland Bay.This vibrant pastel view of Langland Bay, which is in remarkably fresh condition, is closely related to Sisley’s painting of the same view, dated 1897, which is today in a private collection. Both views were probably painted from a window of the Osborne Hotel overlooking the Bay. In a letter to his friend Adolph Tavernier, sent on the 18th of August 1897, soon after arrival at the hotel, Sisley wrote ‘I have been here for five days. The countryside is totally different from Penarth, more hilly, and on a larger scale. The sea is magnificent and the subjects are interesting. But you have to fight hard against the wind, which reigns supreme here. I had not experienced this nuisance before, but I am getting used to coping with it and have already discovered the knack. I think I shall wait till the bad weather drives me away, because there is plenty to do here.’

The Cliffs at Langland Bay, Wales