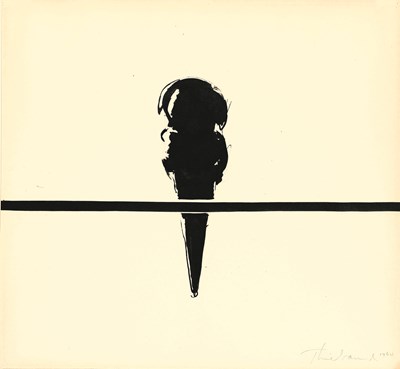 
The present sheet is a superb example of Wayne Thiebaud’s undoubted skill as a draughtsman. Divorced from the colour that one associates with most of his work in oil and pastel, this bold pen and ink drawing is a testament to the artist’s genius for composition and line. Of the artist’s monochrome drawings, Carter Ratliffe has recently written, ‘Thiebaud’s light and the colors that produce [sic] are so well known that it is easy to overlook something obvious: he is a brilliant draftsman. Rendered in black and white and all the intervening tones, his drawings lay bare the formal architecture that endows even his most lushly chromatic images with their startling clarity.’ The artist himself has said that ‘Drawing is very central...Drawing, to me, is a kind of research tool, that painting rests upon...I’ve drawn all my life. For a lot of painters I admire, that’s been central to their work as well – people like Degas, who talked about making the same drawing once, twice, ten, a hundred times, if necessary.’Ratcliff’s comments on a pen and ink wash drawing of Candied Apples of 1964 may equally be applied to the present sheet, drawn the same year: ‘an image made of stark white and nearly unmodulated black...[the] harsh tonal contrast invites us to see the apples bathed in the flourescent light that fills so many of Thiebaud’s paintings of food. Subtlety is to be seen in nuances of the quick, improvisatory brush marks...’The subject of ice cream is one that Thiebaud has treated throughout his career; indeed in a recent essay, the American art historian John Wilmerding dubbed the artist ‘The Emperor of Ice Cream.’ Among the earliest and most significant treatments of this subject is the painting Girl with an Ice Cream Cone of 1963, in the Hirshhorn Museum and Sculpture Garden in Washington, DC., and, closer in composition to the present sheet, the painting Four Ice Cream Cones of 1964, today in the Phoenix Art Museum in Arizona. Thiebaud has continued to produce paintings of ice cream cones well into the present century, as well as on a cigar box and in several etchings.