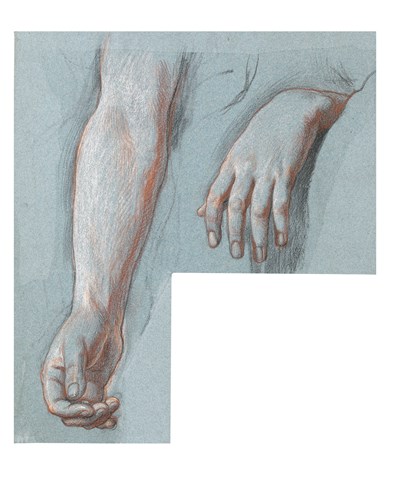 a. Studies of a Right Arm and Left Hand; b. Study of a Left Hand Sold


All three studies on these two drawings are preparatory for Alexandre Hesse’s painting of Saint Genevieve Distributing Bread to the Poor in the chapel of Sainte-Geneviève in the Parisian church of Saint-Séverin. The first of Hesse’s major church commissions, the decoration of the chapel, comprising four mural paintings of scenes from the life of Saint Genevieve, was completed in 1852. The studies of a right arm and a left hand are those of the fainting woman supported by a man in the centre of the composition. The study of a left hand drawn on a separate piece of paper is for the raised hand of the figure at the left edge of the composition. Two other studies for this same figure, one of his head and another of his hand, were on the Paris art market in 1979. A stylistically comparable study of a right hand, drawn in pastel and chalk on blue paper, is in the Louvre, and is preparatory for the hand of Louis XIV in Hesse’s painting of Louis XIV Establishing the French Navy in the Palais de Luxembourg in Paris. Another, similar study of an arm and hand, also drawn in black, red and white chalks on blue paper, was on the art market in London in 1980.

a. Studies of a Right Arm and Left Hand; b. Study of a Left Hand