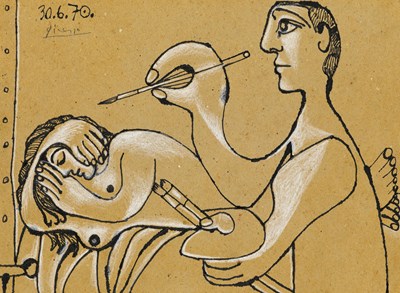 The Artist and his Model (Le peintre et son modèle)


In the last two decades of his career Picasso produced a very large number of paintings, drawings and prints on the theme of the artist and model. Indeed, as one scholar has noted, ‘the theme [is] one of the most frequently recurring motifs of Picasso’s late period…During Picasso’s later years, as he grew ever more obsessed with the theme, the repeated focus on the artist and his model became a means by which he could explore the mysteries of the creative process, parody the effects of aging and his own image as a living Old Master, while also, on a deeper level, actively denying his own fear of death.’ These works take a variety of forms, but in general depict a painter, armed with a palette and brushes, facing a canvas, usually seen from the side, and a nude model, either sitting or reclining. Sometimes the painter is shown alone with the canvas but without the model, while at times the scene is set in a studio, or else out of doors. Another scholar has seen these late works as part of a larger theme; that of painting itself: ‘In the last twenty years of his life, Picasso literally took painting as his model, his subject, or his example…Whether in variations on the old masters, or in depictions of the place of creation (the studio), or of the model (the woman, the nude), or of the painter (young or old, bearded, wit or without palette, costumed or stripped bare), all the works of this period have to do with a single theme, that of painter and model. This theme enables him to illustrate the mechanics of creation through the relationship between the three principal participants, the artist, the model and the canvas, ie. the subject, the object and the verb, with all the thousand ways in which it can be conjugated.’ In the summer months of June and July of 1970, Picasso turned with renewed energy to the subject of the artist and model in a substantial number of drawings, executed in pencil, chalk, ink, gouache or coloured crayons. Indeed, more than half of the nearly two hundred drawings exhibited at the Galerie Louis Leiris the following year – representing the vast majority of the drawings which the artist had executed over a period of thirteen months, between December 1969 and January 1971 - were devoted to this theme. Drawn on the 30th of June, 1970, the present sheet came in the midst of this period of frenzied activity, and is one of two drawings executed on the same day. In drawings such as this, Picasso depicts the artist as both creator and voyeur, in the act of painting and observing a sleeping nude model. We are here watching a work in progress, rather than the finished result, and are observing the creative process. As in many of these drawings, the artist in the composition may be - indeed, was almost certainly intended to be - identified with Picasso himself, although here depicted in the guise of a much more youthful painter. (It should be noted, however, that unlike the artist in these drawings, Picasso did not usually use a palette – he preferred newspaper – and only rarely worked from a posed model; nor, indeed, did he often use an easel.) Gary Tinterow’s perceptive description of a closely comparable drawing from this period - executed two days later, on July 2nd, 1970 - may equally be applied to the present sheet: ‘Picasso delineates both the painter and the recumbent woman with the same fluid line, highlighting the forms with white crayon to achieve an effect of low relief. The consistent treatment of the figures suggests that the contributions of both painter and model to the achievement of the work of art are equal, and at the same time establishes a certain ambiguity. For the observer is unsure whether he should read the model as a drawing or painting on a canvas, or as a woman lying adjacent to the painter’s stool, or both. This ambiguity is further heightened by the position of the tacking edge of the canvas at the extreme left. Or finally, this same clue can be interpreted as an indication that the entire scene takes place only in the fictional realm of art, which of course it does.’ Picasso’s fertile imagination can be seen in the immense variety of the drawings devoted to the artist and model theme during this particular period in the summer of 1970. This compositional diversity is especially evident in the case of drawings executed on the same day. For example, a series of eight successive drawings of The Artist and his Model, all drawn on the 4th of July, 1970, and today in the collection of the Musée National d’Art Moderne in Paris, retains the same relative positions of the artist, model and canvas but varies the appearance of the artist and the pose of the model, as well as the interplay between them, in each composition.Drawn just three years before the artist’s death, this superb drawing is a testament to the artist’s undiminished skills as a draughtsman at the age of eighty-nine. Executed while the great exhibition of his paintings and drawings from the previous year was on display at the Palais des Papes in Avignon, the drawing represents the artist continuing to explore a theme that had occupied him since about 1963. After 1970, however, and in the final two years of his life, Picasso only rarely returned to this theme of the artist and model.

Provenance:
Galerie Louise Leiris, Paris, in 1971Acquired from them by a private collector in 1992Private collection, until 2013.

The Artist and his Model (Le peintre et son modèle)