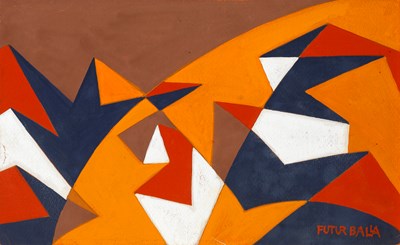 
Datable to the 1920’s, the present sheet is part of a large group of works by Giacomo Balla that remained in his home and studio, the Casa Balla in Rome, after his death. Inherited by the artist’s daughters Luce and Elica Balla, Forme rumore was eventually acquired from them in 1974 by the art historian Roberto Gnisci. A comparable gouache drawing by Balla, entitled Linee andamentali and datable to c.1925, was sold at auction in Italy in 2001. The present sheet may also be thematically related to a number of other works by Balla, also entitled Forme Rumore, which have generally been dated several years earlier. These include a painting of c.1918 in a Milanese private collection and a gouache of about the same date in another private collection, as well as a gouache entitled Linea di Velocità e Forme Rumore that appeared at auction in 1980. Also somewhat similar is a collage of c.1915, also in a private collection. The authenticity of this work has been confirmed by Elena Gigli. This work is included in her archives under the number 2013/553.