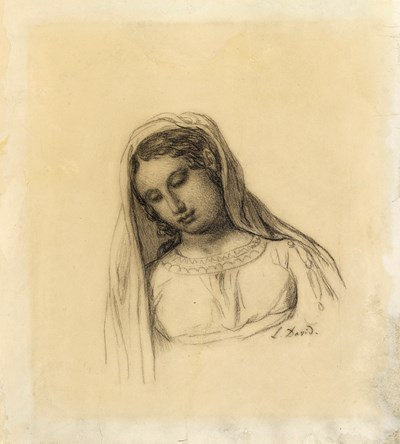 A Young Woman with a Veil Sold

Black chalk and graphite on thin paper, laid down onto a backing sheet.Signed L. David. at the lower right. A number of small repaired tears around the edges of the sheet and a larger repaired tear which runs vertically through the centre of the sheet.232 x 209 mm. (9 1/8 x 8 1/4 in.) [sheet]


This drawing may be dated to the time of David’s exile in Brussels, and compares well stylistically with other drawings of this late period. The physiognomy and pose of the woman in this drawing is particularly close to that of the right hand figure in a drawing of three women of 1817, in the Museum voor Schone Kunsten in Ghent. A similar figure also appears, in reverse, in another black chalk drawing of 1817.Comparisons may also be made with some of a group of single female heads, drawn in black chalk, in the collection of the Musée des Beaux-Arts in Rouen, which have been dated by Rosenberg and Prat to between 1819 and 1823.

A Young Woman with a Veil