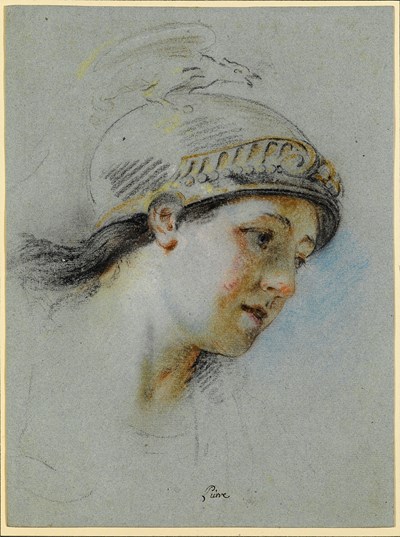 The Head of a Female Figure Wearing a Helmet


Although a record of the contents of his studio, published after his death in 1789, mentions ‘boëtes à couleur & au pastel’, Jean-Baptiste Marie Pierre seems to have only used the medium of pastel occasionally. Just a handful of works in this medium by the artist have survived, although other examples are recorded in 18th and 19th century auction catalogues. Pierre’s few known pastel drawings take the form of character heads or têtes d’expression, either of beautiful young women – seemingly inspired by the example of Rosalba Carriera - or of old, bearded men. It has been suggested that, during the last two decades of his career, as he found himself burdened with administrative duties and unable to devote much time to painting, Pierre continued to produce pastel drawings, many of which may have been intended as gifts.This drawing remains unrelated to any surviving painting by Pierre, although a close physiognomical similarity may be noted with the head of an allegorical figure of Strength, one of a series of red monochrome paintings executed by the artist in 1753 for the Cabinet de Conseil at the Château of Fontainebleau. Similar heads are also found in other paintings by Pierre, such as that of Athena in two of a set of four canvases illustrating scenes from the story of Ulysses, painted around 1747. While the present sheet has the appearance of being a study for a painting, the fact that it is signed suggests that it may also have been intended as an independent work of art, despite being not as finished as most other surviving pastel heads by the artist. A stylistically comparable drawing in pastel by Pierre, also drawn on blue paper, is a study of a bearded man in the collection of the Albertina in Vienna.

Provenance:
Louis Meier, LondonPurchased from him in c.1955 by Ralph Holland, NewcastleThence by descent until 2013.

The Head of a Female Figure Wearing a Helmet