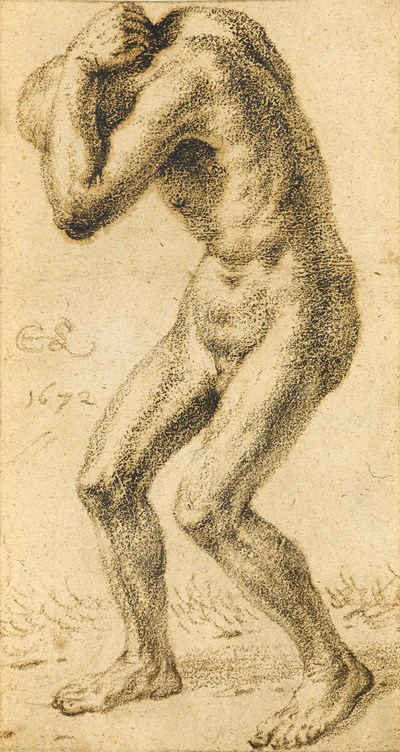 
A prolific draughtsman, Cornelis Saftleven produced a wide variety of drawings, including a large number of single-figure studies – some of which seem to have been produced as independent works for sale to collectors - together with biblical scenes, mythological and genre subjects and landscapes, as well as numerous studies of animals. About a third of Saftleven’s drawings are signed (usually with a monogram) and dated, and examples are known for almost every year between 1625 and 1677; indeed, the number of monogrammed and dated drawings in his oeuvre would further suggest that some of these works may well have been intended to be sold. Dated 1672, the drawing is an extremely rare example of a nude figure study in Saftleven’s extensive oeuvre as a draughtsman. Indeed, in his comprehensive catalogue of the artist’s drawings, which numbers several hundred sheets, Wolfgang Schultz lists just one drawing of a male nude; a study of a seated youth, dated 1669, in the British Museum. Like most of Saftleven’s figure drawings, the present sheet is unrelated to any known painting by the artist. David Ekserdjian hs pointed out, however, that in the pose of this figure Saftleven may have been inspired by a well-known sculptural model of a stooped figure known as Atlas; possibly to be identified with a bronze statuette of an old man attributed to Jacopo Sansovino and today in the Pushkin Museum in Moscow.James Forbes (1749-1819) worked for the British East India Company, and lived for seventeen years in India. On Forbes’s return to England in 1784, he settled at Stanmore Hill, just to the north of London. He assembled much of his drawings and notes into the four volumes of his Oriental Memoirs, published from 1813 onwards. Forbes’s only daughter Rose married Marc-René de Montalembert (1777-1831), and their son, the journalist and historian Charles de Montalembert (1810-1870) was born in London and, after his father’s return to Paris, was raised by James Forbes at Stanmore Hill.