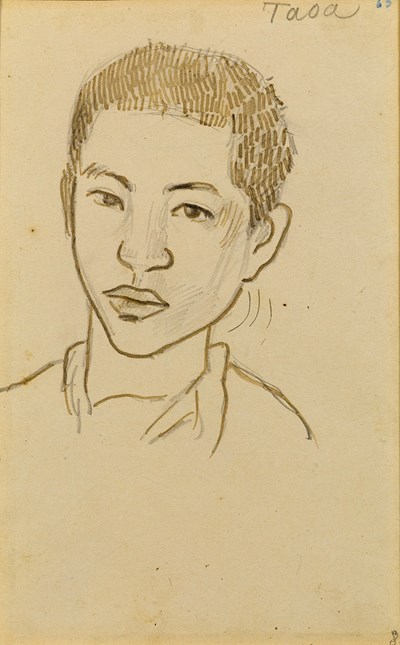 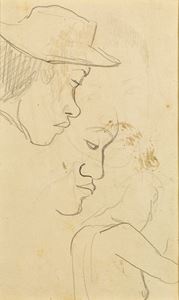 Taoa: The Head of a Young Tahitian Boy [recto]; Two Heads in Profile and a Study of a Torso [verso] Sold


During his first Tahitian period, from June 1891 to June 1893, Paul Gauguin spent the first several months of his stay making drawings and sketches of the people and landscapes of the island, with the intention of using them as studies for paintings. As he wrote in a letter to the painter Paul Sérusier in November 1891, ‘I am working hard and earnestly. I can’t tell if it’s good, for I’m doing a lot and at the same time it amounts to nothing. Not one painting as yet, but a great deal of research that can lead to something, many notes that will be of use to me for a long time, I hope...’This drawing is part of a small sketchbook of some 130 pages – later known as the Carnet de Tahiti – which was used by Gauguin during this first visit to Tahiti. This page was the recto of page 43 of the sketchbook, which was dismembered in the mid-1950’s. When he first published the sketchbook, Bernard Dorival aptly described the present sheet as ‘a beautiful and charming portrait, that of a young boy of whom Gauguin has, in the upper right portion of his sheet, noted the name: Taoa.’ Dorival was the first to note that both sides of this drawing can be related to Gauguin’s 1891 painting The Meal (Le repas), sometimes called The Bananas, today in the Musée d’Orsay in Paris. One of the first works painted by Gauguin in Tahiti, the painting is dominated by a large bunch of bananas that takes up almost a quarter of the composition, while behind the table sit three children who ignore the food before them, and seem somewhat apprehensive. First exhibited in public at the posthumous retrospective of Gauguin’s work held at the Salon d’Automne in 1906, The Meal has been described by Charles Stuckey as a ‘stunning picture, a work that is half still life and half genre and without any apparent precedent among [Gauguin’s] own works or those by colleagues.’The recto of the present sheet would appear to be a study for the boy depicted at the right of The Meal, while the study of the head of a youth on the verso seems to be of the same model as the boy at the left of the painted composition. Two further drawings of Tahitian children from the same sketchbook, also formerly in the Lewyt collection, may also be related to the Musée d’Orsay painting. As Dorival noted of the Carnet de Tahiti, ‘these faces he drew in our sketchbook, how they become different when they reappear in finished paintings! Compare the three young Tahitians from pages 43R, 43V and 101R and what they become in the painting of the Meal, and it will seem obvious. The painter captured the uniqueness of the three figures in the sketches, but he tends, in the painting, to strip them of their particularities and transform them, from the individuals they were, to specimens of a human race, maybe more: as simple representatives of the human condition.’ Dorival further noted that the present sheet reveals the stylistic influence on Gauguin of Van Gogh’s drawings in reed pen: ‘Thus, in the delightful head of Taoa, drawn with a wide and firm pen stroke which gives the outline, suggests the form and expresses character without harming either its purity or its musicality, are the associated small stick-like strokes used to define the boy’s hair, that not only reveal a certain mechanical aspect to the facture, but also reveal an imitation of Van Gogh: how many drawings, indeed, Vincent left behind, using the tip of a reed pen to tracing vibrating lines, more or less tight, more or less parallel, a style he thought came from Japanese art!’

Provenance:
Ambroise Vollard, ParisQuatre-Chemins-Edidart (W. Walter), Paris, in 1954Acquired from them by Alexander and Elisabeth Lewyt, New York, in 1954Thence by descent until 2013.

Taoa: The Head of a Young Tahitian Boy [recto]; Two Heads in Profile and a Study of a Torso [verso]