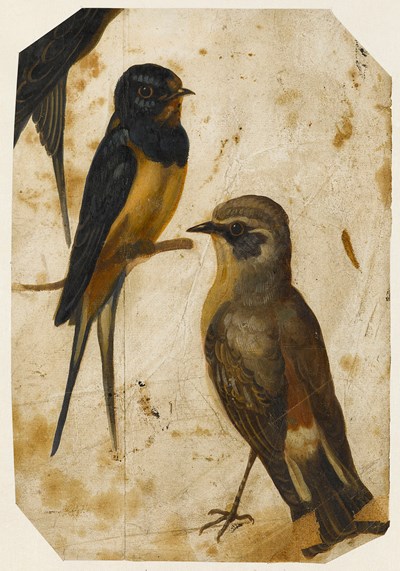 
The two birds depicted would appear to be a barn swallow (Hirundo rustica) at the left and a northern wheatear (Oenanthe oenanthe) at the right. Drawings of this type have often been tentatively attributed to the painter and stuccatore Giovanni da Udine (1487-1561), a pupil and assistant of Raphael who, as a draughtsman, was particularly known for his studies of birds. A group of similar drawings of birds, attributed to Giovanni da Udine by the early 18th century French collector and connoiseur Pierre Crozat, is in the collection of the Nationalmuseum in Stockholm. The present pair of drawings are, however, somewhat less refined in execution than those in Stockholm.

Two Studies of Birds and a Partial Study of a Third