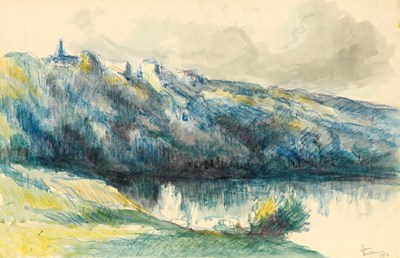 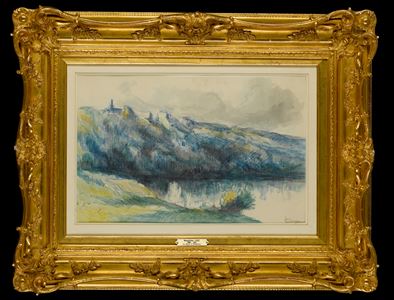 The Seine at Rolleboise Sold


Luce first visited the village of Rolleboise, at a bend on the river Seine between Mantes and Bonnières, northwest of Paris, in 1917. He had discovered the village through the painter Alexis Veillet, and rented a room in the town, from where he would often visit his friend Claude Monet at Giverny, not far away. In 1920 he purchased a house just below the church at Rolleboise, as Carol Heitz has noted, ‘on a hillside sloping down gently to the Seine, a most pleasant and peaceful spot...This is where Luce spent the happiest years of his life.’ Luce produced numerous vibrant paintings of the countryside around Rolleboise and the valley of the Seine, painted with great sensitivity. The artist died in Paris and is buried at Rolleboise.Drawn in 1924, this large and vibrant watercolour is characteristic of Luce’s confident draughtsmanship. The view depicts the village and church of Rolleboise, perched above a bend in the Seine.