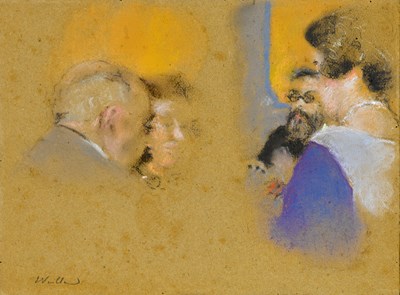 
This pastel sketch depicts a card game at the Château des Clayes, a château near Versailles which was the country estate of Vuillard’s close friends, Jos and Lucy Hessel. The Hessels had moved there in 1926, and Vuillard was to become a frequent visitor to the house, where he had his own room. Indeed, Les Clayes, conveniently close to Paris and with its large park designed by André Le Nôtre, became the artist’s rural retreat for the last decade of his life. As Kimberly Jones has noted, ‘The time he spent away from Paris in the countryside was essential to Vuillard’s productivity; it offered him repose, but also a change of scenery that helped expand his own perceptions of the world around him.’ In later years Jacques Salomon, the artist’s nephew by marriage, recalled of Vuillard at Les Clayes that ‘he was constantly drawing his friends, and those who found his eye upon them knew they must hold the pose in which he had caught them...I can still picture Vuillard at a social gathering. He would suddenly look intently at a group...with a direct stare. Then his face would grow grave, and without taking his eyes off his subjects he would whip his notebook out of his pocket...and, without hesitation, start to draw. He worked with great speed, scarcely glancing at his paper, entirely preoccupied by the sight before him.’ The present sheet may be grouped with a small number of paintings and pastels of card players by Vuillard at the Château des Clayes, all dating to the first half of the 1930’s. These include a large painting in distemper in the collection of the Aberdeen Art Gallery and Museums and a pastel drawing of The Game of Cards in the Musée Municipal de l’Évêche in Limoges. Four other pastel drawings of the subject of card players at Les Clayes are known through old photographs.The bearded man at the right may be identified as the novelist, playwright and journalist Tristan Bernard (1866-1947), an old friend of Vuillard’s and a member of the circle of friends centred around the Hessels who was also a frequent guest at Les Clayes. Bernard had met Vuillard when both were students at the Lycée Condorcet in Paris. The provenance of this small pastel includes several members of Vuillard’s circle of intimate friends. Its first owner was Jos (Joseph) Hessel (1859-1942), who was a close friend of the artist and his principal agent and dealer for the latter part of his career. Hessel’s wife Lucy was to be Vuillard’s muse, model and lover for almost forty years. The present sheet was inherited by the Hessel’s adopted daughter Lulu Grandjean-Hassel, later Mme. Jacques Arpels (1921-2004), who appears in many of Vuillard’s paintings, drawings and photographs after 1930. Sold by her at auction in 1963, the drawing came into the possession of the art dealer Sam Salz (1894-1981), who had been introduced to Vuillard by Hessel in 1938. Salz, who was painted by the artist in 1939, handled the sale of many of the most important paintings by Vuillard today in American collections. The present sheet was acquired in 1978 by the New York collector Joanne Melniker Stern (1924-2011).