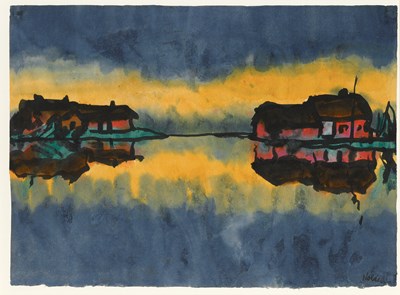 
One of Nolde’s favourite subjects were the low-lying marsh landscapes of the border province of North Schleswig, where he was born and raised. In 1912 he had purchased a farmhouse, named ‘Utenwarf’, in just such a marshy landscape, near the town of Tondern (now a part of Denmark) and not far from Nolde, the village of his birth. In 1926 he moved a few kilometres south and west to Seebüll, where he designed a house and studio in which he lived and worked for the rest of his life. As has been noted of Nolde, ‘he felt a profound, almost spiritual attachment to his native land, by which he meant that flat landscape of dykes and marshes penned in between the North Sea and the hilly coastal area to the East, giving on to the Baltic – a region which is his own day marked the disputed border between Germany and Denmark. It was this locality…which provided him with not merely spiritual nourishment but also by far the most significant repertoire of motifs and subjects: the fields and pastures that surrounded the isolated farmhouses of his nearest neighbours, clouds and sea, flowers and gardens...Nolde invests his landscapes with an undisguised symbolic significance, exploiting marshes and fields, clouds and sky as metaphors for the awesome power of nature and the eternal confrontation between man in his natural state and the elements.’ Nolde’s views of these wide expanses of marshland, with isolated farmhouses dwarfed by high skies above a low horizon, account for much of his most appealing work. The present sheet displays the luminous intensity of colour that is a particular characteristic of Nolde’s finest watercolours. These often come close to abstraction in the repeated soaking of the paper with pigment that was a hallmark of the artist’s technique. Nolde’s second wife Jolanthe has left a fascinating account of his watercolour technique, noting that the artist applied colours ‘five, six or more times, producing the most remarkable effect of depth...patiently the brush caresses the surface, the wet paper cockles, the colour gradually accumulating in the little hollows...Because he painted with such diluted colours, the contours would stray across the surface of the paper for up to an hour before they were finally dry...He would paint, the paper would soak up the colour, the contours would spread as if the material had become liberated.’

Marsh Landscape with Farmhouses at Utenwarf