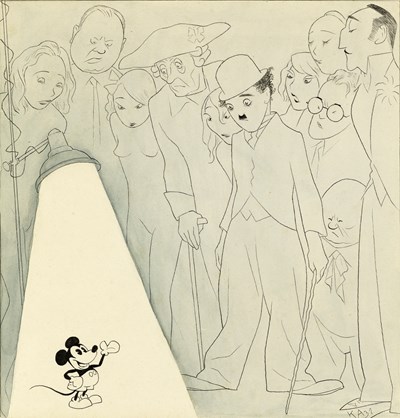 
A drawing for an illustration published in the 26th January 1931 issue of Simplicissimus, accompanied by the caption ‘Unerhört, dieses Biest stellt unser aller Prominenz in den Schatten!’ (‘Outrageous, this beast steals the limelight from all of our celebrities!’). Among the celebrities depicted in the drawing may be recognized the film stars Tallulah Bankhead, Wallace Beery, Charlie Chaplin and Adolphe Menjou. Also depicted is the German actor Otto Gebühr in the guise of Frederick II, King of Prussia; a role he portrayed in fifteen German films between 1920 and 1942.Published in Germany, Simplicissimus was one of the most important satirical magazines of the first half of the 20th century, and enjoyed an international reputation. The magazine was founded in Munich in 1896 by the publisher Albert Langen, who envisioned an illustrated satirical weekly for a German audience, along the lines of Punch in England or L’assiette au beurre, Le Rire or Gil Blas illustré in France. Simplicissimus soon became especially renowned for its artwork, with artists from all over Europe contributing drawings for its pages, all of which were reproduced to a very high standard. By 1904 the magazine’s circulation was in excess of 65,000 copies a week, but after the First World War the magazine began to focus more on social than political commentary. With the rise to power of Hitler and the Nazi party in 1933, the magazine lost much of its edge, becoming largely a propaganda outlet, and it ceased publication in September 1944.Karl Arnold was one of the most significant contributors to Simplicissimus. His first drawing was published in the magazine in 1907, but it was not until 1917 that his work began to appear regularly in its pages. By this time Arnold was a staff artist, with a share in the profits of the magazine, and he can be credited with shaping its ‘look’ during the 1920’s and 1930’s. Arnold remained closely associated with the magazine until its closure.