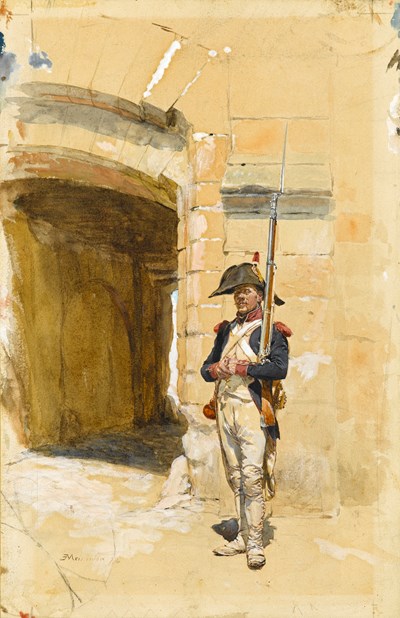 Watercolour and gouache, over an underdrawing in pencil. Signed EMeissoner and indistinctly dated at the lower left.320 x 203 mm. (12 5/8 x 8 in.) [sheet]


A study for a figure of a standing sentry in Meissonier’s painting The Orderlies of 1869, formerly owned by the 19th century American collector Alexander T. Stewart and today in the Musee Massey des Hussards in Tarbes. The scene depicts two hussars of the 8th Regiment in conversation with a sentry, and the artist has used, as the setting for the painting, the grounds of his own manor at Poissy. The model for the sentry is apparently one Jacob Leusen, who seems to have posed for many of Meissonier’s paintings of hussars, and who was described by Philippe Burty as ‘a little, fair, lean-shanked man, who could sit or stand with the fixity of a statue.’The prominent archway behind the sentry in this drawing differs from the wall seen behind the figure in the finished painting. It appears, therefore, that Meissonier originally intended this sentry to be shown in front of the arched entrance gateway to the old abbey adjoining his estate at Poissy, which is visible, flanked by another sentry, in the left background of the painting.Two other preparatory studies for The Orderlies are known. An oil sketch of the standing sentry, seen in isolation, is in the collection of the Musée de l’Armée in Paris, while an oil sketch for the mounted hussar at the right is in the Joslyn Art Museum in Omaha, Nebraska.