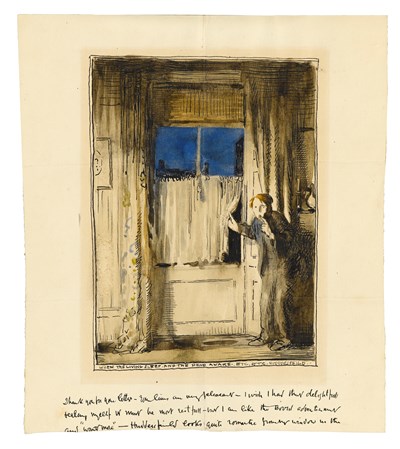 When the Living Sleep and the Dead Awake Sold

Pencil, ink and watercolour on buff paper. Inscribed WHEN THE LIVING SLEEP AND THE DEAD AWAKE. ETC. ETC. HUDDERSFIELD at the lower edge of the image. Further inscribed by the artist ‘Thank you for the letter – your lines are very pleasant – I wish I had that delightful / feeling myself it must be most restfull – but I am like the Bovril advertisement / and “want more” – Huddersfield looks quite romantic from my window in the -’ in the lower margin.240 x 208 mm. (9 1/2 x 8 1/8 in.) [sheet]


The present sheet, part of a letter, was probably drawn in the summer of 1906, when Orpen was working in the town of Huddersfield in West Yorkshire, where he was engaged on a commission for a portrait of a Miss Lumb. It was part of a letter sent by the artist to his wealthy American patron and mistress, Florence Evelyn St. George (1870-1938). The drawing may be grouped with a number of sketches of the window in Orpen’s home in Chelsea in London, often with the night sky seen beyond, as here.As Bruce Arnold has written, with particular reference to the present sheet, ‘It would be hard to describe the letters which Orpen wrote to [Mrs. St. George] as ‘love letters’...In all, 365 letters, fragments of letters and drawings have survived. An overall judgement cannot be made, since in many cases the text has been cut away, leaving only a drawing surrounded by tantalising but unintelligible morsels of prose. The general tone is of warmth, friendship and intimacy, with only occasional overtones of romance. It was a loving friendship...There are curious, sad fragments. When he was in Huddersfield, painting a portrait of a Miss Lumb, he sent to Mrs St George a ‘Window Picture’, small, and in sepia and blue wash. In composition it is like the series involving Grace. But Orpen stands with his finger to his lips, holding back the curtain to show the sky. And he has written: ‘When the living sleep and the dead awake...’ He shares in this and other moments his more intimate feelings with mistress rather than wife.’In 1912 Florence Evelyn St. George gave birth to a daughter, named Vivien, by the artist. The present sheet was one of several intimate letters and drawings by Orpen that Vivien inherited from her mother. (As she recalled in her memoirs, published many years later, ‘[Orpen] had written to my mother almost daily, as other men might keep a diary; fascinating letters, always illustrated and sometimes composed of nothing but drawings, like a strip cartoon.’) In 1974 Vivien gave over three hundred and fifty illustrated letters, drawings and sketches by Orpen, dating from between 1906 and 1929, to the National Gallery of Ireland in Dublin. The present sheet - one of the artist’s earliest letters to Mrs. St. George - and was one of only a handful of illustrated letters by Orpen that Vivien Graves retained in her possession.

When the Living Sleep and the Dead Awake