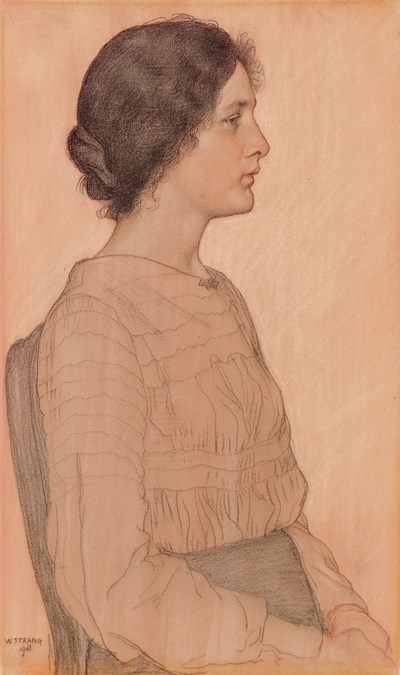 
From early in his career, Strang was recognized as a brilliant draughtsman. He was in particular much admired for his portrait drawings, inspired by those of Hans Holbein in the Royal Library at Windsor Castle, which he had studied closely. Between 1898 and 1909 Strang produced some five hundred drawings of this ‘Holbein’ type, characterized by the use of red and black chalks on paper washed pink or beige, and he continued to make them until the end of his career. Strang’s portrait drawings were never idealized and, as the designer Charles Ashbee, who sat for the artist, later recalled, ‘in each of his portraits there is some touch of his sitters’ ugliness revealed in the beauty of the draughtsmanship.’Comparable drawings by Strang are in the collections of the Tate, the Fitzwilliam Museum, and several other museums.

Provenance:
The Fine Art Society, London, in October 1976Acquired from them by Leo Herzel, ChicagoThence by descent until 2012.

Portrait of a Seated Young Woman