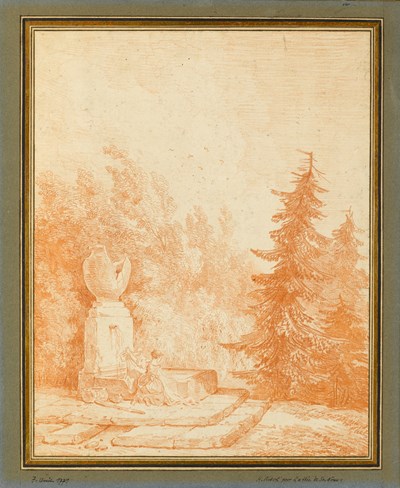 Wooded Landscape with a Washerwoman at a Fountain Sold


Like Fragonard, Hubert Robert often made counterproofs of his red chalk drawings. This was an essential task, since by making a counterproof any excess red chalk dust – which otherwise might easily smear - would be removed from the original drawing. At times, the artist would extensively rework the counterproof, adding pen, ink and wash and watercolour to create a second finished, albeit reversed, version of the original composition. A large number of red chalk counterproofs of landscapes by Robert, mainly from the collection of the 18th century architect Pierre-Adrien Pâris, are today in the Musée des Beaux-Arts et d’Archéologie in Besançon.The date of 1771 inscribed on the old mount may be accurate, as the present sheet would certainly seem to date from after Robert’s return to France from Italy in 1765. By the early 1770’s he had developed his mature style as a draughtsman, creating attractive landscapes and pastoral scenes with a refined and subtle use of red chalk.According to the inscription on the mount, this drawing was once in the collection of Robert’s friend and patron, Jean-Claude Richard, Abbé de Saint-Non (1727-1791).

Provenance:
Jean-Claude Richard, abbé de Saint-Non (according to the inscription on the mount).

Wooded Landscape with a Washerwoman at a Fountain