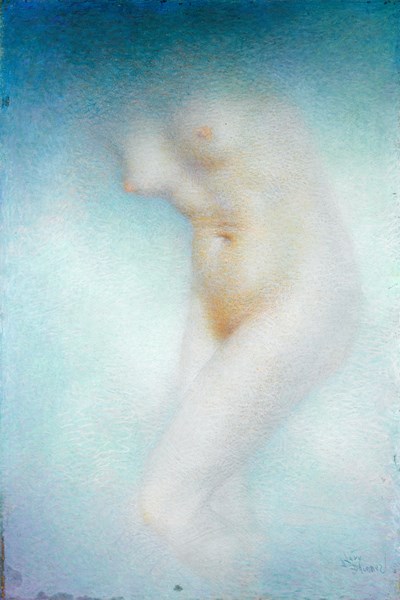 
From around 1920 onwards, Lévy-Dhurmer produced several pastels of female nudes, often given musical titles, which are characterized by a a predominantly bluish tonality and a precise application of fine dots of pastel, in a manner akin to the pointillist technique. The artist’s conception of these nebulous, sensual nudes - depicted as simple torsos, as in the present sheet - was poetically described by him in a letter of 1928 to his friend Louis Robin: ‘The Nudes...Tuberose, ripe wheat, black iris - mother-of-pearls and strawberries - pinks, apricot hues, soft morning blues - night blues, flashes of lightning - curves disappearing in dimness – strength, charm, disorder, chaste dreams united with sensual delight - this is, my dear Louis Robin, all that I have tried to include in these bodies that sway, turn silent, fade away - that one incessantly pursues but will never attain: has anyone ever succeeded in defining the tone, the form, the continuous metamorphosis of a cloud.’A stylistically comparable large pastel study of a nude female torso by Lévy-Dhurmer, datable to the first half of the 1920’s, is in the Musée d’Orsay in Paris. Entitled Sonate au claire de lune, the pastel was one of several works by the artist inspired by the music of Beethoven. The Musée d’Orsay pastel has been described in terms that are equally applicable to the present sheet: ‘This is one of Levy-Dhurmer’s most beautiful nudes for its monumentality, the fluidity of its composition, its vibrant rendering (numerous crosshatched lines in the neo-impressionist manner) and finally for its colouring (harmonies of purple, green, orange, yellow.’) Among other comparable pastel nudes by Lévy-Dhurmer is one in the collection of the Musée de Beaux-Arts de la Ville de Paris at the Petit Palais in Paris.