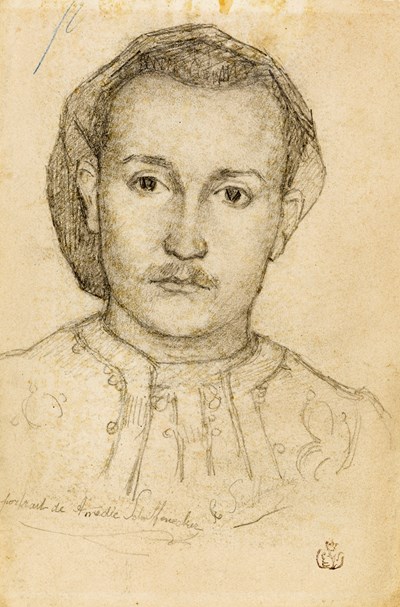 
The present sheet is a portrait of the painter’s younger brother, Léon Paul Amédée Schuffenecker (1854-1936), who worked as a wine merchant in Meudon, and later became a dealer in paintings, furniture and musical instruments. In 1903, shortly before the artist’s divorce, Amédée agreed to purchase almost the entirety of his brother’s collection of avant-garde paintings by Gauguin, Van Gogh, Cezanne, and other artists. Although this was apparently done in order to keep them in the family and to prevent the paintings being sold by the artist’s wife after the divorce, in fact many of the works in the collection were later sold by Amédée, mainly through other dealers, and often in Germany. He is also known to have himself acquired a number of works by Van Gogh from the artist’s sister-in-law, Johanna van Gogh-Bonger, in 1906. At Amédée Schuffenecker’s death, the remainder of his collection was inherited by Emile’s daughter, Jeanne.

Provenance:
The estate of the artist, with the atelier monogram (not in Lugt) stamped at the lower rightBy descent to his daughter, Jeanne Schuffenecker, ParisJacques Fouquet (Galerie Les Deux Iles), ParisAnonymous sale, Morlaix, 7 August 1995, lot 175.