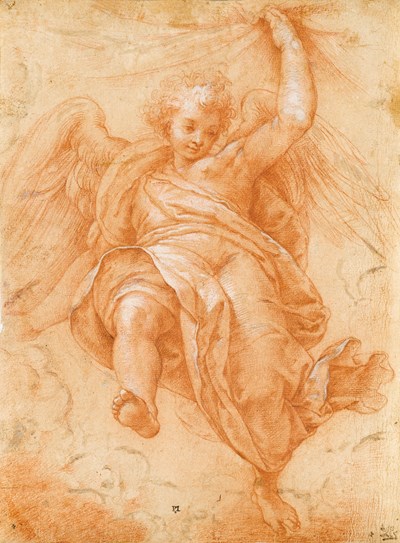 
Calvaert was a prolific and talented draughtsman, and many of his drawings are dated or can be connected with surviving paintings. The present sheet would appear to be a preparatory study, with some differences, for the angel which appears at the lower right of an altarpiece of The Assumption of the Virgin, datable to around 1569-1570. Formerly the high altar of the Bolognese church of Santa Maria degli Angeli, the painting is today in the Pinacoteca Nazionale in Bologna. Although the angle of the head and position of the torso of the angel in the painting are slightly different from the figure in the drawing, the position of the legs and the upraised arm is identical.The attribution of the The Assumption of the Virgin has been the subject of some scholarly debate. As early as 1570, when the altarpiece is mentioned in a description of the inauguration of the church in April of that year, the painting has generally been identified as the work of Lorenzo Sabatini (c.1530-1576). However, in his magisterial Felsina pittrice, published in 1678, the Bolognese art historian Carlo Cesare Malvasia records that the altarpiece was in fact painted by the young Calvaert when he was still in Sabatini’s studio, working from drawings provided by his master, and that the elder artist only retouched the final painting. Modern scholarship has tended to refer to the altarpiece as the work of Sabatini, with the possible contribution of his student Calvaert noted, although a few scholars have preferred to attribute the large painting in its entirety to Calvaert. Furthermore, it should be noted that the style of the present sheet is much closer to the drawings of Calvaert than those of Sabatini, which would suggest that Calvaert must have at least been responsible for the design of the figure of the angel in the painting. Malvasia writes that Calvaert was particulary admired, as a draughtsman, for his drawings in red chalk. A stylistically comparable red chalk drawing by Calvaert of a standing saint seen from below, on the London art market in 1988, depicts the figure with his front foot resting on a horizontal rod, thereby allowing the artist to study the fall of drapery from beneath; the same method of posing the model is likely to have been used for the present sheet.

Literature:
A Brief Chronological Description of a Collection of Original Drawings and Sketches by the Old Masters of the Different Schools of Europe...formed by the late Mr. William Mayor of Bayswater Hill, London, London, 1875, p.85, no.400 (‘Denis Calvert…Study of an Angel. Red chalk, heightened with white. H. 10 3/8 in. W. 7 1/2 in. Ex Collections Earl of Arundel and Sir Peter Lely.’)