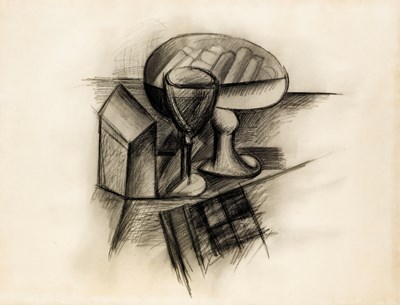 Still Life with a Glass and Bowl Sold


This large drawing is datable to c.1909-1910.During his early Cubist phase, Picasso painted a series of still life paintings and drawings - depicting jugs, pitchers, glasses, bowls and fruit on a table – in his Paris studio. These still life compositions, painted between the autumn of 1907 and the spring of 1910, are characterized by simple geometric forms, depicted with a certain monumentality. Prominent among the still life paintings of this period are such works as the Carafe and Three Bowls in the collection of the Hermitage in St. Petersburg, the Bowls and Jug in the Philadelphia Museum of Art and the Bread and Fruit Dish on a Table in the Kunstmuseum in Basel. Picasso’s still life compositions of this period display the influence of Paul Cézanne, filtered through a monumental Cubism, as was noted by the critic Léon Werth in a review of an exhibition at the Galerie Notre-Dame-des-Champs in Paris in 1910. Describing a still life painting by Picasso in the exhibition, Werth noted that it showed a ‘fruit-dish and glass, which display their structure, substructure, and superstructure and whose harmony, simplified as it is, is made up of the yellows and greens of certain Cézannes.’It has been suggested that the composition of these Cubist drawings, with the objects placed against a spare white background, may be due to the fact that in the autumn of 1909, Picasso and Fernande Olivier moved out of the Bateau-Lavoir studio in which the artist had lived worked for more than five years and settled into an apartment on the Boulevard de Clichy. The new apartment, as well as being larger and with more light than the old studio, was also relatively bare, as much of the contents of the Bateau-Lavoir studio remained packed in boxes.

Still Life with a Glass and Bowl