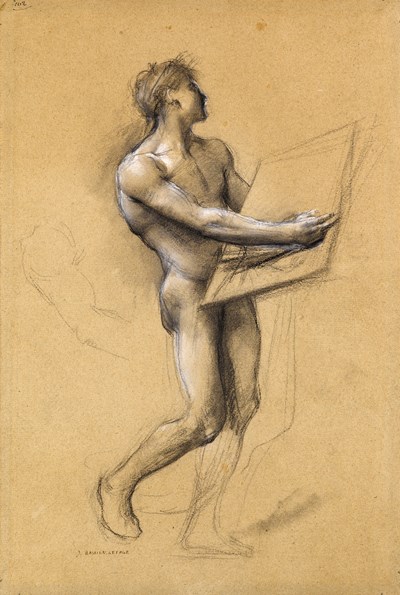 
The present sheet is a preparatory study for an unfinished and now-lost painting of Orpheus by Bastien-Lepage, painted in 1877. The artist mentions the painting in a letter written to his parents in January 1877: ‘I went back to work starting a small painting (I mean small in size). It represents Orpheus asking once again for Eurydice from the god of the underworld…Orpheus walks in front, as it was agreed; as he walks, he plays the lyre. Distracted or rather tormented by the desire to see Eurydice, we feel that he will soon turn his head, and Mercury, who does not lose sight of him, will abduct his beloved. All of this is outlined, and I hope to finish it in a short time.’ This painting of Orpheus was, however, eventually abandoned. Its composition is nevertheless recorded in a handful of preparatory oil sketches, most of which are also now lost, as well as five drawings and an etching for the figure of Orpheus. Bastien-Lepage also produced a small sculpted statuette for the figure of Orpheus, which is today in a private collection.This small statuette of Orpheus reappears in Bastien-Lepage’s magisterial portrait of the actress Sarah Bernhardt, painted in 1879 and exhibited at the Grosvenor Gallery in London the following year; the painting is today in a private collection. Arguably the definitive portrait of the famous actress, Bastien-Lepage depicts Bernhardt holding the small sculpture of Orpheus. Although Bernhardt had a produced and exhibited a number of sculptures and had indeed achieved some renown as a sculptress, the small statuette of Orpheus which she holds was, in fact, that executed by Bastien-Lepage two years earlier. The present sheet was, in all likelihood, at one time in the collection of Dr. Joseph Liouville (1809-1882), an eminent mathematician who was a close friend of the artist and acquired several paintings and drawings by him. Bastien-Lepage also painted a portrait of Liouville in 1880.